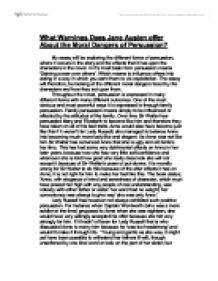 What Warnings Does Jane Austen offer About the Moral Dangers of Persuasion?

What Warnings Does Jane Austen offer About the Moral Dangers of Persuasion? My essay will be exploring the different forms of persuasion, where it occurs in the story and the effects that it has upon the characters in the novel. In it's most basic form persuasion means 'Gaining power over others'. Which means to influence others into acting in a way in which you want them to via exploitation. The essay will therefore, be looking at the different moral dangers faced by the characters and how they act upon them. Throughout the novel, persuasion is expressed in many different forms with many different outcomes. One of the most obvious and most powerful ways it is expressed is through family persuasion. Family persuasion means simply to be influenced or affected by the attitudes of the family. Over time Sir Walter has persuaded Mary and Elizabeth to become like him and therefore they have taken on all of his bad traits. Anne would also have become just like this if it weren't for Lady Russell; she managed to balance Anne into becoming much more lady-like and elegant. As Anne was not like him Sir Walter has convinced Anne that she is ugly and old before her time. This has had some very detrimental effects on Anne in her later years, because now she has very little self-confidence and whenever ...read more.

' "If we can persuade your father to all this" said Lady Russell looking over her papers, " Much may be done." ' For them to accomplish this they would have to use direct persuasion (where someone intentionally persuades someone to do what they want.) This is however not always bad because they are trying to persuade Sir Walter to do this with his best interests in mind. It is purely the fact that Sir Walter is too insolent to realise that this is what needs to be done which is why people need to persuade him. Sir Walter could however take their persuasion the wrong way, he may believe that they are trying to put him further in debt or try to run his life as though he can't do it himself. A much more common theme later on in the book is social persuasion - this is when the public take on an idea which then gets spread around as a certain truth when really it could be nothing more than a rumour. For example when Mr Elliot persuaded people that he was going to marry Anne the public spread it around as gossip which then escalated way out of proportion which then put great pressure on Anne. ...read more.

But they would not let her walk home so they rang for a chair, again Anne had to persuade them that she would rather walk, but they would not let her walk alone either so Charles insisted that he go with her, but she really needed to be on her own so again she had to persuade Charles that he needn't walk with her. This posed moral dangers for Anne because she was not being entirely truthful to them it was for the good of herself and Captain Wentworth that she didn't tell them. Throughout this book persuasion has been expressed in a number of different ways. It has had both detrimental and positive outcomes. In many of the cases which ended up with negative outcomes the persuader was selfish and was looking at only their own point of view without taking into consideration the thoughts or opinions of the person they are persuading. Just because someone trusts another person's opinion it doesn't mean that they have to take their advice or be persuaded by them. If Anne had gone on what she believed in rather than Lady Russell she would have been much happier. The life of Jane Austen has had a large part to play in the story of persuasion as she was persuaded not to marry someone who she believed she loved and ended up regretting it. ...read more.