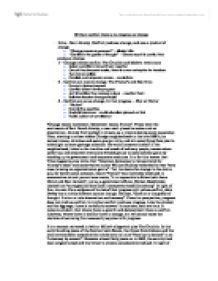 Without conflict there is no progress or change. Discuss

Without conflict there is no progress or change * Intro - Saul Alinsky. Conflict produces change, and also a product of change o "Change means movement" - Alinsky's life o "Conflict is the gadfly of thought" - Dewey says it is conflict that produces change * 1 - Change creates conflict. The Crucible and Modern revolutions o Salem conditions forced them together o Once it has become easier, there is a new enterprise for freedom o Two forces collide o Parallels contemporary scene - revolutions * 2 - Conflict can inspire change. The Proctor's and Bali Nine o Proctor's tiptoed around o Conflict doesn't invite progress o As it intensifies they reassess values - reunites them o Bali nine leaders changed in jail * 3 - Conflict can cause change, but not progress - War on Terror o "Friction" o Descriptive opening o Racial intolerance - multiculturalism placed on trial o Public culture of surveillance "Change means movement. Movement means friction". These were the sentiments of Saul David Alinsky, a man well-placed to make such an observation. Alinsky first worked in prisons as a juvenile delinquency researcher. Then, starting in crime-ridden Chicago neighborhoods in the late 1930's, he helped unions, churches and social groups unite, and win everything from jobs to streetlight to mere garbage collection. He would immerse himself in the neighborhood, listen to the troubles and needs of ordinary people, assess where power lay, and empower previously divided groups to seek common goals by standing up to government and corporate machines. ...read more.

Saul Alinsky's concept therefore appears to have considerable merit - there will always inevitably be some form of resistance to movements of change. In this way, wherever there is considerable progress there will also be episodes of conflict. Conversely, as John Dewey suggests, conflict can actually produce change itself. Indeed,when conflict intensifies and places us in confronting situations, it can be become the channel through which we reassess our values and seek to improve. For seven months, following John Proctor's affair with Abigail, he and his wife Elizabeth "tiptoed" around each other. We are presented with a situation where Proctor attacks her for the guilt that besets him, and she subsequently, reaffirms her position on the moral high ground, unable to forgive her husband on account of one sin. As Miller informs us, "these people had no ritual for the washing away of sins". Indeed, initially such conflict does not invite either of them to progress their values but encourages them to remain intransigent, stuck in their positions, and distanced from each other. Yet, as the conflict intensifies once Elizabeth is seized, the confronting nature of the situation compels them to re-evaluate their love and it undoubtedly grows to a firmer bond beyond petty squabbling. John appreciates and re-discovers his love for his wife, as expressed through the passion in his voice, "I will fall like an ocean upon that court". ...read more.

We embarked on War to 'protect our freedom', yet this is the very thing we were slowly denying on our home soil. A public culture of surveillance was quickly established. Governments, with popular backing, took the profoundly illiberal task of interrogating the values of their citizens, telling them what they should be. The result for Western Muslims has been a decade defending their faith from associations with terrorism. Indeed, we have seen a decade of division between Christians and Muslims, Westerners and 'them'. This is our revenge for the September 11 attacks, and the world is a sorrier place for it. In this way, heightened tension has the capacity to interfere with out judgement and distort our morals. And so, this piteous episode demonstrates that intense conflict will still inevitably cause change, but often it does advocate progression, but rather its very antithesis, regression. As such, Saul Alinsky and John Dewey appear to have considerable merit in their suggestions that change and conflict are intricately linked concepts. In one regard, conflict is a product of progress, whereas, depending on the conditions, it can also be the reactant that manufactures change. It is ultimately our inner-will that determines if this is to the betterment or destruction of society. And so, whilst for an abstract, intangible concept, there is an innate danger in making absolute statements, it appears without conflict, there is no progress or change. ...read more.