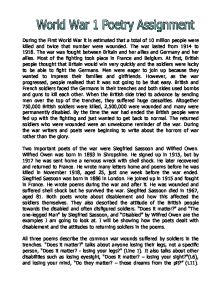 During the First World War it is estimated that a total of 10 million people were killed and twice that number were wounded. The war lasted from 1914 to 1918. The war was fought between Britain and her allies and Germany and her allies. Most of the fighting took place in France and Belgium. At first, British people thought that Britain would win very quickly and the soldiers were lucky to be able to fight the Germans. Men were eager to join up because they wanted to impress their families and girlfriends. However, as the war progressed, people realised that it was not going to be that easy. British and French soldiers faced the Germans in their trenches and both sides used bombs and guns to kill each other. When the British side tried to advance by sending men over the top of the trenches, they suffered huge casualties. Altogether 750,000 British soldiers were killed, 2,500,000 were wounded and many were permanently disabled. By the time the war had ended the British people were fed up with the fighting and just wanted to get back to normal. The returned soldiers who were wounded were an unwelcome reminder of the war. During the war writers and poets were beginning to write about the horrors of war rather than the glory. Two important poets of the war were Siegfried Sassoon and Wilfred Owen. Wilfred Owen was born in 1893 in Shropshire. He signed up in 1915, but by 1917 he was sent home a nervous wreck with shell shock. ...read more.

(L15) This is as if people are telling the war-wounded that they do not mind them being injured, they will treat them the same. The irony of it is that this actually means that people do not care about the war-wounded soldiers as they are a bad reminder of the fighting that people want to forget. "Disabled" aims to tell the reader what goes through the invalid's mind when he sees something he can no longer have, such as women. This poem also tries to show the reader that the now disabled men were once fit, healthy young men with the rest of their life ahead of them. It contrasts well who they used to be and what they have been reduced to. This poem also tells you that the innocent young boy only joined up because he was a little drunk and wanted to impress a woman. It makes the reader wish that he had had more sense and not jumped straight in for the wrong reasons. "The One-legged man" plans to shock the reader. Apart from a few hints there is nothing to show that the person is a war victim who has been disabled in a horrific way, the tone of the poem seems cheerful and "looks on the bright side". Unlike the other two poems, this one seems to concentrate on what the man does have, rather than what he is missing out on. He has part of his life back, "Splendid to eat and sleep and choose a wife," (L9) ...read more.

In "Does it matter?" by Siegfried Sassoon and "Disabled" by Wilfred Owen repetition is used. "The One-legged man" does not repeat anything. In "Does it matter?" the title is repeated at the beginning of each verse, it is a rhetorical question that grabs the reader's attention and makes them think whether or not it would matter to them. Another line that is repeated is, "people will always be kind," this really makes the point that it does not make a difference how kind they are; the soldiers will still have their war-wounds. In the last two lines of "Disabled", "Why don't they come?" is repeated. The effect of this is that the young man sounds desperate, he relies on others. Again it is a rhetorical question that interests the reader. I have found all three of these poems to be successful in their own way when dealing with disablement and the attitudes to returning soldiers. My personal favourite was "Does it matter?" by Siegfried Sassoon, it works best for me because I think that the sarcastic and ironic tone makes it very bitter, yet true. It is simple and to the point, I think that the repetition of the title is very effective as it draws the whole poem together, gives it structure and keeps the reader interested. World War 1 ended or ruined the lives of millions of men, but they will always be remembered through poetry such as these poems by Wilfred Owen and Siegfried Sassoon. ...read more.