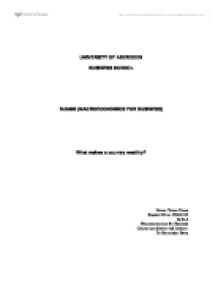 What makes a country wealthy?

UNIVERSITY OF ABERDEEN BUSINESS SCHOOL BU5302 (MACROECONOMICS FOR BUSINESS) What.makes.a.country.wealthy? Name: Varun Varun Student ID no. 05940113 M.B.A Macroeconomics for Business Course coordinator and lecturer: Dr Harminder Battu INTRODUCTION In the essay, I will be taking example of India to show what makes India a wealthy country. This will facilitates me to express myself more clearly and reader to understand easily. For this I will use GDP, Factors of production, saving and investment of the nation. Standard of living of the people of the country and education standard. With the help of all these I will explain the question give. I think GDP is not only the wealth of the nation but it is one of the components of the wealth of the country. Natural resources, labour force, capital of country, entrepenure, and people living in the country are the real wealth of the country. WEALTH OF COUNTRY Country wealth is not only the produced assets or physical capital (GDP) but it is one of the main components of the countries wealth. Country's wealth is its effective and efficient factor of production, saving (investment), living standard of people and education standard. India has a mixed economy combining features of both capitalist market economies and socialist command economies. The private sector is regulated and the government elected by the people of India controls the public sector. According to Purchasing power parity, Indian economy is at fourth number in the world with GDP of $3.36 trillion. ...read more.

Although the quality of the labour depends upon the size of the population and ability and willingness of population to work. Further, it depends upon age, sex and other factors of distribution of the population. 17% of the world population of around 1.09 billion people makes India second most populated country in the world. Growth rate has gone down from 2.15 for the period of years from 1951-1981 to 1.93. 58 % of India total population comes under the working age of the population and which is expected to increase as decrease in the dependency ratio. Increase in the literacy rate, better health care has also benefited India a lot. Labour forces can be categorised in 9 sectors (Fig.no.2) Increase in the labour force will increase the wealth of the country. Thus the greater the work force of the country the wealthier it will be. Work force of the country is the real wealth of the country. CAPITAL: capital is one of the most important factors of production. It is also known as tangible things, which are used to produce other things. Capital can be expressed as money for the operation of the business. Capital goods are those goods like machinery, plant, and equipment, which help in production of other services, and goods. Example like machinery and plant are used for manufacturing cars, motorbike, and other household goods. India is a capital rich country. It has the manufacturing capacity of producing big to small machines. ...read more.

Positive and high saving and investment, good living standard of people and effective education structure is wealthy. As high, the GDP goes the country will become wealthier that helps overall development and growth of the country. Efficient factors of production help the country to remain on the path of growth and development. They are the one who decides the future course for the country. The more efficient and affective the factors of production more the growth and more of wealth for the country. Saving of nation and investment of nation is also the one of the main component of a nation's wealth. The higher the saving the higher the investment and results in the increase in the wealth of the country. Standard of living is a wealth to a nation. As the people living in the country are the true wealth of the nation and how they are living in it is of same importance thus this explains that the higher the living standard of people of country more wealth the country. As I have explained in the earlier point, the people are the real assets of the nation they must be taken care off. Educated population of a country makes it wealthy as the workforce is guided in to right direction to work for the nation. The high the education standard of the country the educated the people of the country and more of wealth for the country. All high in these points focused above makes the nation wealth and help the nation to grow and develop. ...read more.