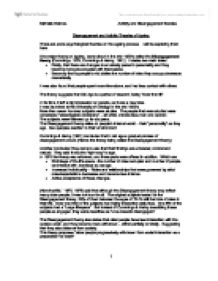 Disengagement and Activity Theories of Ageing There are some psychological theories on the ageing process. I will be exploring them here. One major theory on ageing, came about in the mid 1950's called the Disengagement theory (Cummings, 1975; Cummings & Henry, 1961). It states two main ideas: * Firstly, that there are changes to an elderly person's personality and they become more pre-occupied with themselves. * Secondly that by people's mid sixties the number of roles they occupy decreases dramatically. It was also found that people spent more time alone, and had less contact with others. The theory suggests that Old Age is a period of descent, being "Over the hill". In its time, it left a big impression on people, as it was a new idea. It was launched at the University of Chicago in the mid 1950's. More than seven hundred subjects were studies. The people that were studied were considered "stereotypical Americans" - all white, middle class men and women. The subjects were followed up for six years. The Disengagement theory relies on people's internal world - their "personality" as they age. Also peoples reaction to their environment. Cummings & Henry (1961) concluded that in old age a gradual process of disengagement occurs (Hence the theory being called the Disengagement theory) Another conclusion they came to was that their findings are universal, normal and natural. ...read more.

Another way in which the Activity theory and Disengagement theory are similar is that they are both social theories, the psychologists studied people and their interaction with each other/social behaviour as they get older. There is also the similarity between these two theories that they are both unrealistic, they both assume that all people are going to fall into these categories. They only experimented on people in one place in one country. So it is highly likely that they would have got the same results within the same culture. But this is not to say that it is the same with all cultures, they should have experimented on older people in a number of different countries. So both of these theories make the assumption that all cultures are the same, but some cultures do not have running water, or do not have cars, or not nursing homes etc. These theories would not apply to all cultures, and I think it is unfair and na�ve of them to assume this. I also noticed some differences between the Activity and Disengagement theories. The Disengagement theory is saying what happens as people get older, and the Activity theory is saying what people should do to stay healthy when they age. One difference is where the Disengagement theory says that older people have less contact with others and become preoccupied with themselves. Whereas the Activity theory says that older people maintain roles with others in their lives. ...read more.

But not all people would be like this, is depends on a person's circumstance, some older people may like to be alone, but they may have enjoyed their own company their whole life. Some older people might not be able to go out and socialise, due to lack of money, or not seeing people anymore due to retirement. I find both these theories assume a lot, they assume that all older people will feel cut off and alone - but their whole family and friends are not going to suddenly disappear and leave them alone. If the older person has created their own family, the chance is that they are older than most of the people around them, which makes it less likely that they will die, so the older person should not feel cut off and alone. I do think that a person in the Activity theory would be much healthier than a person in the Disengagement theory, as long as they weren't overdoing it. So prompting the Activity theory is a good thing, but if the Disengagement theory is the natural way for some people, then it should be left that way. I also think that these theories are not valid as they did not experiment enough, they should have looked at a wider span of people - both sexes in; different countries, cultures and different ethnic origin. Not to have just experimented on people in America - as this does not make the theory apply to all older people. ...read more.