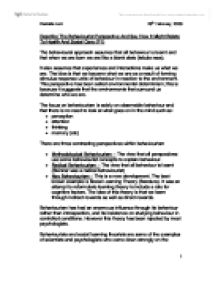 Describe The Behaviourist Perspective And Say How It Might Relate To Health And Social Care (P1) The behavioural approach assumes that all behaviour is learnt and that when we are born we are like a blank slate (tabula rasa). It also assumes that experiences and interactions make us what we are. The idea is that we become what we are as a result of forming stimulus response units of behaviour in reaction to the environment. This perspective has been called environmental determinism; this is because it suggests that the environments that surround us determine who we are. The focus on behaviourism is solely on observable behaviour and that there is no need to look at what goes on in the mind such as: * perception * attention * thinking * memory (etc) There are three contrasting perspectives within behaviourism * Methodological Behaviourism - The view that all perspectives use some behaviourist concepts to explain behaviour. * Radical Behaviourism - The view that all behaviour is learnt (Skinner was a radical behaviourist) * Neo Behaviourism - This is a new development. ...read more.

The noise scared Albert and he eventually became scared of the rat. Watson and Rayner, proved that an association had been formed between touching the white rat and fear of the noise. This conditioned fear then became generalized to other stimuli such as other fluffy animals and cotton wool. His parents soon became concerned and withdrew their son. This study raises ethical issues and would certainly not have been able to take place in today's society. Watson and Rayner used a theory that was later defined as classical conditioning. This was made famous by Ivan Pavlov in 1927, he was a biologist who, first presented dogs with food and measured their salivatory response. He then began ringing a bell just before presenting the food. After a little while the dog started salivating when the sound of the bell was heard. As far as their immediate physiological responses were concerned, the sound of the bell became equivalent to the presentation of food. The original reflex response, which was the food had been transferred to the new stimulus (the bell). ...read more.

Negative reinforcers provide stronger learning, they are less likely to become extinct than positive reinforcers because motivation to avoid pain is higher than motivation to seek reward. Skinner's most famous experiment aimed at producing a "socialised child". He put scores of children in a crib sized box, including his own. His ultimate aim was not only to control the behaviour of isolated people, but to gain insights into how to control society as a whole. For example at an early age we learn what behaviours get rewarded and what behaviours get punished. Conduct disorders or anti social personality disorders have been explained in operant conditioning. If childhood aggression is rewarded, then that behaviour is likely to be repeated and reinforced again and again. On the other hand behaviours that may appear to be maladaptive to others may be functional or adaptive for the individual. An example of this is anxiety or depression might gain a reward in the form of attention from others. Behaviourism might be able to explain how some behaviours are learnt but it can't explain everything, in these circumstances, other theories might be considered such as social learning theory or the psychodynamic theory. ?? ?? ?? ?? Danielle Lant 28th February, 2008 1 ...read more.

Star rating 3
This assignment describes different behaviourist perspectives and briefly their application to health and social care. There is a good introduction which describes what behaviourism is. This is followed by some theoretical content which is not needed to meet the criterion. The assignment then moves on to the content that is required. Reinforcement and conditioning are both considered with reference to Pavlov and Skinner as appropriate. Brief links to the application of each have been made to health and social care practice. This assignment could be improved by removing content that is not needed to meet the criteria, as well as by adding detail to the descriptions of the application of the perspectives. It would have been good to see how this approach ? positive reinforcement, rewards, punishment and behaviour modification ? could be used in an early years' setting. A bibliography would also be useful at the end of the work.