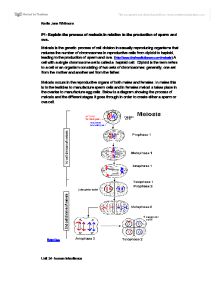 P1- Explain the process of meiosis in relation to the production of sperm and ova. Meiosis is the genetic process of cell division in sexually reproducing organisms that reduces the number of chromosomes in reproductive cells from diploid to haploid, leading to the production of sperm and ova. (http://www.thefreedictionary.com/meiosis) A cell with a single chromosome set is called a haploid cell. Diploid is the term refers to a cell or an organism consisting of two sets of chromosomes: generally, one set from the mother and another set from the father. Meiosis occurs in the reproductive organs of both males and females. In males this is in the testicles to manufacture sperm cells and in females meiosis takes place in the ovaries to manufacture egg cells. ...read more.

Metaphase 1- In the Metaphase, the centromere of each chromosome becomes attached to a spindle fibre. These spindle fibres pull the tetrads to the equator of the spindle and homologous chromosomes are lined up side by side as tetrads. Anaphase 1- During Anaphase in the first division of meiosis homologous pairs separate with sister chromatids remaining together. When the spindles shorten (and the continuous spindles slide past one another) the homologous pairs are separated. If each member of the pair is pulled to opposite ends of the cell no centromeres split. The cell elongates in preparation for division down the center. Telophase 1- The last meiotic division effectively ends when the chromosomes arrive at the poles. ...read more.

Telophase 2- Here the nuclei re-form, the spindles break down, the cytoplasm divides and Cell division is complete. Four haploid daughter cells are obtained. Both women and men have this process occurring within their bodies but the end result differs slightly. When meiosis occurs in a male the end result is four separate sperm cells which all develop and function correctly. However when meiosis occurs in a female the outcome is still four cells, egg cells this is, but only one of these eggs will develop. Not all four eggs are needed so the other three provide nutrients and food for the main egg that develops. Occasionally two eggs may develop but rarely any more. ?? ?? ?? ?? Karlie Jane Whitmore Unit 34- human inheritance ...read more.