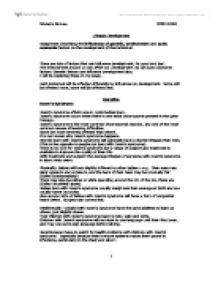 influences of genetic, environment and socio economic factors on the development of the individual

The term undernourishment means a person is not eating enough, or not eating a balanced diet. Poverty is the main cause for undernourishment. This is because people in these situations are too poor to buy food, or to buy land to grow food. Other factors that can cause undernourishment would be if there was a war or an extreme change in climate. This could cause drastic food shortages or starvation. Another thing that could lead to undernourishment is if there is a shortage of certain types of foods - this could lead to deficiency diseases. How much money a person earns seems to determine their place in society. People who don't have much money may live on council estates, sometimes receive benefits, and cannot buy anything new or go on holiday. If people cannot spend on themselves, it can bring them down and make them depressed. Especially looking at all the things they want to buy, and seeing people that can buy them. If people cannot go on holiday, they may become stressed out, and not be able to have a proper break. In extreme circumstances this could lead to a mental breakdown. When people do have a lot of money, they generally own big properties. They can afford new things and to go on holiday. They can afford expensive entertainment - such as the theatre and nice restaurants. It may be difficult for people with little money, especially in children and adolescents, because due to peer pressure, the other peers might not think they're 'cool' because they're not wearing trendy clothes. Also people with little money wouldn't be able to afford things others may take for granted. Such as buying food out, or going to the cinema or going to the gym/swimming pool. If people do not have access to the gym, they may become obese. Also people with low income wouldn't be able to spend a lot of money on food. ...read more.

This could be because you're a male, and you're particularly camp, or spend all your time with females. There is a stereotype of how males should be, they could be discriminated against for acting how typically a female should act. Same goes for a female acting how a male should typically act. Another way people get discriminated against is in work - men sometimes get paid more then women - even though they do the same job. Also in-direct discrimination, a person might not be able to get a job because the interviewer would prefer a member of the opposite sex for the position. Prejudices about roles. For example - Toys given to children (guns for boys, dolls for girls) Another example is how much alcohol men and women can drink - it is said that men can drink more. Also women bear children - so they will be out of work for some time. They might not be able to go back to the same job. There is also the stereotypical roles of women - working in the kitchen, in the home and mothering. Whereas for men that they go out to work. Education How educated people get, what grades they get, and how high up in education they go can determine how far up society (work wise) they can go. If a person is very well educated then they can get a well paid job. If someone has never managed to get any education (where they lived or they had a teenage pregnancy etc.) they may not be able to get a job at all. If they do it would probably be minimum wage. Although, there are lots of opportunities now for people to get back into education, if they missed the opportunity when they were young. They also don't have to pay if they are on benefits, or receiving low income. Any age can go into education. There are also lots of opportunities for people with learning difficulties. These opportunities boost peoples self esteem. ?? ?? ?? ?? Michelle Holmes 9500114066 1 ...read more.

This is an example of how to get sidetracked in writing an essay of factors that affect development. The writer has covered many different factors, some in great detail but they have lost the focus of the essay. They often fail to discuss how the factor impacts on development.

To enhance the essay, it is necessary to discuss how it helps or hinders normal development patterns. Discussing PIES would also help increase the grades in this work.