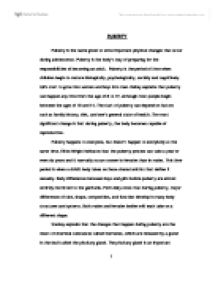 PUBERTY Puberty is the name given to some important physical changes that occur during adolescence. Puberty is the body's way of preparing for the responsibilities of becoming an adult. Puberty is the period of time when children begin to mature biologically, psychologically, socially and cognitively. Girls start to grow into women and boys into men. Bailey explains that puberty can happen any time from the age of 8 to 17, although most people begin between the ages of 10 and 14. The start of puberty can depend on factors such as family history, diet, and one's general state of health. The most significant change is that during puberty, the body becomes capable of reproduction. Puberty happens to everyone, but doesn't happen to everybody at the same time. Elliot-Wright indicates that the puberty process can take a year or even six years and it normally occurs sooner in females than in males. This time period is when a child's body takes on those characteristics that define it sexually. Body differences between boys and girls before puberty are almost entirely restricted to the genitalia. Petit-Daly notes that during puberty, major differences of size, shape, composition, and function develop in many body structures and systems. Both males and females bodies will each take on a different shape. ...read more.

This is called delayed puberty, or a "late bloomer". Delayed puberty can be caused by certain illnesses as cystic fibrosis and kidney disease that can make it harder for the body to grow and develop. Eating disorders such as anorexia can delay the puberty process by the body being malnourished which delays growth and development. In the rarest case, Bailey concludes that excessive exercise in girls can delay puberty. Excessive exercise can prevent the body from gaining the amount of the body fat required for menstruation to begin. The delayed puberty process can be helped along with a short course of hormone treatments prescribed by a doctor to get the changes of puberty started. In puberty, girl's figures change gradually. The Petit and Daly describes that the pelvis become larger, hair is grown under the arms and on the legs, breasts appear and the pubis, the part of the body above the vagina, becomes covered in hair. As girls become women they are now sexually excited by sexual thoughts and dreams or masturbation. During puberty, a female's ovaries begin to release eggs. If an egg is fertilized by sperm from a man's penis, it will grow inside of the uterus and develop into a baby. To prepare for this, a thick layer of tissue and blood cells builds up in the uterus. ...read more.

These sensations may include hardening of the penis, ejaculation, masturbation, "wet dreams", and orgasms. Sanders and Myers reminds their readers that you are only given one body and it's yours for life. Good hygiene is very important to maintain. Bathing regularly will help prevent body odor and acne breakouts. Body image is an issue during puberty. Girls are less happy with their bodies and have more negative body images, than boys during this process. Bailey comments that during puberty it is extra important to take care of the body by eating a healthy diet consisting of a variety of foods from the five basic food groups. Get enough rest and exercise. Both will help increase the body's energy and reduce stress levels. In conclusion, puberty is the body's way of preparing for the responsibilities of becoming an adult. Puberty is the period of time when children begin to mature biologically, psychologically, socially and cognitively. Girls start to grow into women and boys into men. Puberty is inevitable to escape from. Everyone has to go through puberty to get a step closer to becoming an adult. Even though everyone has to go through puberty, it doesn't happen to everybody at the same time. The start of puberty can depend on factors such as family history, diet, and one's general state of health. The most significant change is that during puberty, the body becomes capable of reproduction. ...read more.