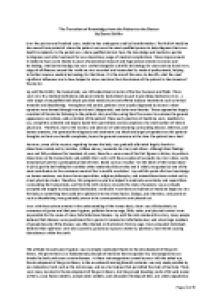 The Transition of Knowledge from the Patient to the Doctor

﻿The Transition of Knowledge from the Patient to the Doctor By Daniel Griffin Over the past several hundred years, medicine has undergone a radical transformation. The field of medicine has moved from period of where the patient was once the most qualified person to help diagnose their own health complaints, to the period now where qualified doctors have the knowledge and medical expertise to diagnose and refer treatment for an extraordinary range of medical complications. These improvements in medicine have come thanks to years of anatomical research and huge advancements in science and technology. Medical technology has now worked alongside scientific technology for years and each and every stage of all illnesses around the world are now recorded and researched by medical professionals, helping to further improve medical technology for the future. It is the aim of this essay to identify what the most significant influences are to have helped to move medicine from the domain of the patient to the domain of the doctor. Up until the 1800?s, the human body was still understood in terms of the four humours and fluids. There were very few medical Institutions and governments took almost no part in providing medical services. A wide range of unqualified individuals provided medical care and offered dubious treatments such as herbal remedies and bloodletting. Throughout this period, patients were usually diagnosed by doctors whose opinions were formed through Ancient Greek (Hippocratic) ...read more.

Edward Jenner was a doctor from England who pioneered the smallpox vaccination. During the smallpox epidemic, Jenner noticed that milkmaids who suffered the mild disease of cowpox never contracted smallpox. Therefore, he decided to carry out an experiment on eight-year-old boy. Jenner extracted pus from a cowpox pustule and inserted it into an incision on the boy's arm. From this experiment the child contracted cowpox but was consequently immunised to smallpox, so Jenner carried out the same method on several other children to prove his theory. Despite his vaccination technique initially being viewed as repulsive, the concept soon caught on and became widespread practice. Louis Pasteur, a scientist from France, invented the process of pasteurisation and made great contributions to our understanding of microbiology. The technique of pasteurisation was thought up when he noticed that bacterial organisms were responsible for ruining milk, beer and wine. He then figured that the bacteria could be removed by boiling and then cooling the liquid. Pasteur also disproved the theory of spontaneous generation, he did this by creating unique swan-necked flasks that allowed air into the container but did not allow particles from the air to drift into the body of the flask. After boiling nutrient substances in his flasks, Pasteur found that these swan-necked containers would remain free of microbes until he broke the necks of the flasks, allowing particles from the air to drift in. ...read more.

Progress in this area has delivered new treatments and therapies to patients with an improved standard of medical care and diagnostic procedures on an unprecedented scale. Thanks to the advancements in healthcare as discussed throughout this essay, medicine has gradually moved from the domain of the patient to the domain of doctor. In recent centuries doctors have transformed into trustworthy experts in medicine from a period in the 1800?s where they were essentially unqualified and continued to embrace the flawed teachings of Hippocrates and Galen. Todays doctors have the benefit of hundreds of years of reliable teachings and discoveries in medicine, as well as access to innovatory technology. Doctors can now spend up to decade studying and training before they are fully qualified in their field. With the aid of modern technology and this extensive period of education in medicine, their skill and expertise has been developed to a level way above that of the patient and understandably places them in a much higher position of trust. As medical technology continues to grow and improve, the future of medicine is bright. Life expectancy and the standard of living in many developed countries has drastically improved into something that our ancestors could only be envious of. Many people around the world now live the majority of their lives free from serious illness and have access to possible treatments and cures if they do become sick. With scientists worldwide continuing to find cures for cancer, diabetes, blindness, and disability, medical technology will carry on providing the world with a healthier future. ...read more.