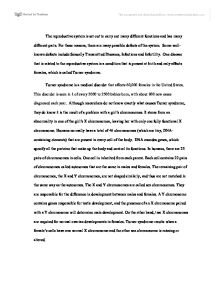 Turner syndrome. One disease that is related to the reproductive system is a condition that is present at birth and only affects females, which is called Turner syndrome.

The reproductive system is set out to carry out many different functions and has many different parts. For these reasons, there are many possible defects of the system.  Some well-known defects include Sexually Transmitted Diseases, Infections and Infertility.  One disease that is related to the reproductive system is a condition that is present at birth and only affects females, which is called Turner syndrome.

Turner syndrome is a medical disorder that affects 60,000 females in the United States. This disorder is seen in 1 of every 2000 to 2500 babies born, with about 800 new cases diagnosed each year. Although researchers do not know exactly what causes Turner syndrome, they do know it is the result of a problem with a girl’s chromosomes. It stems from an abnormality in one of the girl’s X chromosomes, leaving her with only one fully functional X chromosome. Humans normally have a total of 46 chromosomes (which are tiny, DNA-containing elements) that are present in every cell of the body.  DNA encodes genes, which specify all the proteins that make up the body and control its functions. In humans, there are 23 pairs of chromosomes in cells. One cell is inherited from each parent. Each cell contains 22 pairs of chromosomes called autosomes that are the same in males and females. The remaining pair of chromosomes, the X and Y chromosomes, are not shaped similarly, and thus are not matched in the same way as the autosomes. The X and Y chromosomes are called sex chromosomes. They are responsible for the difference in development between males and females. A Y chromosome contains genes responsible for testis development, and the presence of an X chromosome paired with a Y chromosome will determine male development. On the other hand, two X chromosomes are required for normal ovarian developments in females. Turner syndrome results when a female’s cells have one normal X chromosome and the other sex chromosome is missing or altered.

While Turner syndrome is genetic in that it involves the complete or partial absence of X chromosome genes, it is not usually hereditary; it does not “run in the family.” Most cases of Turner syndrome are not inherited, but occur as random events during the formation of reproductive cells (eggs and sperm). An error in cell division called nondisjunction can result in reproductive cells with an abnormal number of chromosomes. For example, an egg or sperm cell may lose a sex chromosome as a result of nondisjunction. If one of these atypical reproductive cells contributes to the genetic makeup of a child, the child will have a single X chromosome in each cell and will be missing the other sex chromosome.

The effects of the condition vary widely among those with Turner syndrome. It all depends on how many of the body’s cells are affected by the changes to the X chromosome. Girls with Turner syndrome are usually short in height. Those who aren’t treated for short stature reach an average height of about 4 feet 7 inches. In addition to growth problems, Turner syndrome prevents the ovaries from developing properly, which affect’s a girl’s sexual development and the ability to have children. Because the ovaries are responsible for making hormones that control breast growth and menstruation, most girls with Turner syndrome will not go through all the changes associated with puberty unless they get treatment for the condition. Nearly all girls with Turner syndrome will be infertile, or unable to become pregnant on their own. Many other health problems occur more often in girls with Turner syndrome, including kidney problems, high blood pressure, heart problems, overweight, hearing difficulties, diabetes and thyroid problems. Some girls may experience learning difficulties, particularly in math. Many also have a difficult time with tasks that require skills such as a map reading or visual organization. In addition to short stature and lack of sexual development, some of the other physical features commonly seen in girls with Turner syndrome are: a “webbed” neck (extra folds of skin extending from the tops of the shoulders to the sides of the neck), a low hairline at the back of the neck, drooping eyelids ,deformity of the spine, differently shaped ears that are set lower on the sides of the head than usual, abnormal bone development, a larger than normal number of moles on the skin, puffiness or swelling of the hands and feet, soft nails that turn upward at the ends when at an older age, colored spots on the skin, short fingers and toes, a hollow appearance to the chest, and extra fluid in the hands and feet.

A diagnosis of Turner syndrome is often made during prenatal testing. Some features of the condition can also be found during an ultrasound. If a diagnosis is confirmed prenatally, the baby may be under the care of a specialist pediatrician immediately after birth. If a diagnosis is not made during prenatal testing then doctors can usually suspect that a person has Turner syndrome based on the presence of certain features of the condition. They usually diagnosed either at birth or around the time they might be expected to go through puberty. If a baby girl has some of the signs of Turner syndrome, a doctor will usually order a special blood test called a karyotype. The test counts the number of chromosomes and can identify any that are abnormally shaped or have missing pieces. In some cases, there are no recognizable signs that a girl has the condition until she reaches the age at which she would normally go through puberty. If the karyotype blood test reveals that a girl has Turner syndrome, her doctor may order additional tests to check for problems with the kidneys, heart, hearing, and other problems that are often associated with Turner syndrome. Any girl that is very short for her age or is growing less than two inches per year should be checked for Turner syndrome.

Because Turner syndrome is a condition that is caused by a chromosomal abnormality, there's no specific cure. However, scientists have developed a number of treatments that can help correct some of the problems associated with the condition — such as growth problems — and researchers are constantly looking into new forms of treatment. Growth hormone treatment can improve growth and influence a girl's final adult height. In fact, in many cases, the treatment can help many girls with Turner syndrome reach a final height in the average range, especially if treatment is started early enough in childhood. Another treatment for Turner syndrome is estrogen replacement, which helps the girl develop the physical changes of puberty, including breast development and menstrual periods. It also helps to protect their bones from osteoporosis until at least the usually age of menopause (50 years). This treatment is often started when a girl reaches about age 12 or 13. A technique called in vitro fertilization can make it possible for some women with Turner syndrome to become pregnant. A donor egg can be used to create an embryo, which is then put into the uterus (womb) of the woman with Turner syndrome. With proper supportive care, the woman can carry the pregnancy to term and deliver a baby through the normal birth process. Counseling for parents and the child at different stages of development has been shown to be beneficial. Learning as much as possible about Turner syndrome and possible problems is also very important. Patients and their families often find they need help coping with the emotional and practical aspects of Turner syndrome. Meeting with a social worker, counselor, or member of the clergy can be helpful to those who want to talk about their feelings or discuss their concerns. Turner syndrome support groups can also help. In support groups, patients and their family members get together to share what they have learned about coping with the disease. Patients may want to talk with a member of their healthcare team about finding a Turner syndrome support group. Turner syndrome support groups may offer support in person, over the telephone, or on the Internet.

For females who have Turner syndrome, the best thing to do is try to live a normal life. It is good for them to stay active in sports or hobbies, consider doing volunteer work which will help them boost their self-esteem, and keep a journal so that they can record the difficulties they are going through. One with Turner syndrome is not different from other people, they just have more difficulties to cope with during their life.