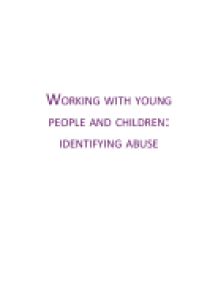 ﻿Working with young people and children: identifying abuse What is Abuse? Abuse is when someone is treated in a way that negatively impacts them emotionally, physically, sexually, mentally or intellectually. The five types of abuse are; neglect, physical, emotional, sexual and domestic violence. In this handbook for identifying abuse the physical indicators and the behavioural indicators will be explained. Some people are predisposed to abuse when they have also suffered abuse from someone else, somebody beaten by their parents is more likely, predisposed to beating their own children. This is a factor that should be taken into account when child abuse or maltreatment is suspected. Another factor that needs to be taken into account is whether the young person or child is being exploited. Are they being sexually exploited, are they being made to do unacceptable activities such as work? There are many ways in which a child can be exploited, and it is easier for those who will, to exploit a child because they are vulnerable. The long term consequences of a child suffering abuse or maltreatment of any kind is that they are more likely to carry it on into their adult life. Children who have suffered this need a lot of care and support to be able to live as healthy a life as normal, this care and support can come in the form of therapists, doctors, social workers, foster carers?etc. It is important to understand how different types of abuse can affect the behaviour of young people and children because it is often the behavioural indicators that alert us first. ...read more.

Physical Indicators * With very young babies a physical indicator of sexual abuse is when they show distress when getting their nappies changed. Because babies so young can?t communicate in words when somewhere hurts all they can do is cry. * Pain or discomfort can indicate sexual abuse because sexual activities on underdeveloped genitals can cause infections, rips and tears. Infections can cause discomfort when passing urine. * Bruising on the inner thighs, scratch marks and bites on areas like the neck, thighs, breasts, buttocks, genital area and lower abdomen indicates sexual abuse because they are areas associated with sexual activity. * Showing discomfort when trying to sit down can indicate sexual abuse when genitals are sore and tender, it can also affect a child?s ability to walk without pain. Behavioural Indicators * Children who have experienced sexual abuse can suffer from nightmares and not being able to sleep well, this is an indicator of sexual abuse because they are showing fear, possibly reliving the abuse in their dreams. * Sometimes children who have experienced sexual abuse feel that giving adults inappropriate attention, seeking their attention with their inappropriate behaviour because they feel that is how to please them. This could manifest in ways like having to be physically close to someone all the time, needing their attention to be fixed on them, moving in ways that are inappropriate and acting compulsively. * Children who have experienced or are experiencing sexual abuse can act destructively and anti-socially. ...read more.

* Some children self-harm when being emotionally abused, they feel it is a way of letting out some feelings. They aren?t physically being hurt yet they still feel pain, but it is in a way they can?t fully comprehend or deal with, when they physically self-harm themselves, they at least can understand that pain. * A reluctance to go home can indicate emotional abuse because it?s not a nice place for them to be, they?d rather be somewhere else. Domestic Violence Witnessing domestic violence is child abuse, domestic violence is when there is controlling behaviour, bullying, physical violence or violent behaviour between two people in a relationship. Domestic abuse also includes emotional, sexual, financial or psychological abuse. Witnessing it can be very detrimental for young people and children, and teenagers can also suffer from domestic abuse. * Witnessing domestic violence can emotionally harm children because they are watching their parent being physically or otherwise harmed and feel helpless. * Children are often asked to lie about injuries on the parent that is being abused, this effects a child psychologically because they may carry that on into their adult lives. * Growing up with domestic violence can make a child predisposed to enter into a violent relationship when they are older or be the abuser themselves. * During episodes of domestic violence, it is not unusual for children to get caught up in it, trying to protect their parent and get caught in the firing line, they can receive physical abuse meant for the parent they are trying to protect. ...read more.