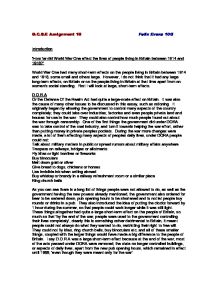 G.C.S.E Assignment 1B Felix Evans 10G Introduction 'How far did World War One effect the lives of people living in Britain between 1914 and 1918?' World War One had many short-term effects on the people living in Britain between 1914 and 1918, some small and others large. However, I do not think that it had any large long-term effects, on Britain or on the people living in Britain at that time apart from on women's social standing. First I will look at large, short-term effects. D.O.R.A Or the Defense Of the Realm Act had quite a large-scale effect on Britain. It was also the cause of many other issues to be discussed in this essay, such as rationing. It originally began by allowing the government to control many aspects of the country completely; they could take over industries, factories and even people private land and houses for use in the war. They could also control how much people found out about the war through censorship. One of the first things the government did under DORA was to take control of the coal industry, and turn it towards helping the war effort, rather than putting money in private peoples pockets. During the war more changes were made, a lot of them affecting many aspects of peoples daily lives, under DORA people could not: Talk about military matters in public or spread rumors ...read more.

For the first two years of the war most propaganda was rather crude, with many tales of British heroism and German atrocities, all highly patriotic, and completely supportive of the war. However as popular opinion changed the government had to adapt their propaganda strategies to cope with it. In 1916, 'appalling' losses were being made at the battle of the Somme, with thousands of soldiers on both sides dieing daily, the government took this opportunity to attempt to show the people what the war was really like. What they filmed however was pre staged mock battles and scenes of soldiers going of the top bravely, and achieving much, they also showed pictures of dead and wounded men, something that had never been done before. This supposedly wakened a lot of people up to the harsh realities of the war, they were seeing so much that shocked and disgusted them, when really most of the footage was fake, and only half of the true story was being told. Propaganda was a powerful short term effect on what people thought of the war, it meant that because people did not know the full harsh reality of war, they kept on supporting it, it is likely that had the real story been told from the outset, the people may well have decided against the war. ...read more.

For their hard work, women won the vote, and eventually on equal terms as men, however, all did not change instantly, when the war finished many women went back to what they used to be doing, and the men came back to their old jobs as well, but I do not think this matters, as the ball had already been set rolling, women had proved that they were mans equals, and they could, and would do it again. I do not thing that World War One deserves to be called a 'Total War' when compared to World War Two, although compared to previous wars such as the Boer war and the Napoleonic wars, World War One was the closest that had come to being a 'total war', people were much more involved in it than they ever had been before, there was conscription, bombing, women were commissioned to work in jobs previously only ever done by men, and the civilian population was being constantly bombarded by hundreds of propaganda messages. This was something people had never experienced before, never had a civilian felt so touched, so involved by the war, never had women worked in factories or had the vote, and civilians had never been bombed as they lay in bed before. Yet, compared to World War Two, WW1 was not total war, the bombing was really not at all severe, neither were the casualties, the weapons, the rationing or the everyday dangers when put next to World War Twos figures. ...read more.