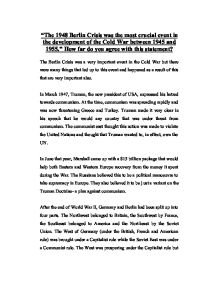 "The 1948 Berlin Crisis was the most crucial event in the development of the Cold War between 1945 and 1955." How far do you agree with this statement? The Berlin Crisis was a very important event in the Cold War but there were many things that led up to this event and happened as a result of this that are very important also. In March 1947, Truman, the new president of USA, expressed his hatred towards communism. At the time, communism was spreading rapidly and was now threatening Greece and Turkey. Truman made it very clear in his speech that he would any country that was under threat from communism. The communist east thought this action was made to violate the United Nations and thought that Truman wanted to, in effect, own the UN. In June that year, Marshall came up with a $15 billion package that would help both Eastern and Western Europe recovery from the money it spent during the War. ...read more.

The blockade involved blocking land routes. The Western powers decided not to let Stalin take control of West Berlin, partly for the reason just stated above. They took a gamble and tried flying supplies into Berlin. The gamble paid off and Berlin was well supplied in everything it needed. After 318 days, Stalin eventually backed down and West Germany stayed out of communist rule. Now Germany had split into two parts. The West, under Western control, was now called the Federal Republic of Germany. It had a new currency and life was looking up. The Russians thought that the West was trying to let Nazism relive by giving them the new currency. The West however, was poor under the communist rule. Life was very bad there and there was lots of poverty and starvation. Eastern Germany was now called the German Democratic Republic although it wasn't very democratic. In 1949, the North Atlantic Treaty Organisation was set up. It was an agreement by Western Europe that they would defend each other in times of attack. ...read more.

This event particularly made the Americans determined to resist the spread of communism in Southeast Asia. (E.g. Korea and Vietnam) In 1950, the communists in North Korea invaded the south (Korea had been divided into a Communist North and Capitalist South). North Korean troops quickly pushed the South Koreans to the southeast corner of their territory. The United Nations Security Council voted to send an army to Korea to fight the Communists. At the time, the Russia were boycotting the UN in the protest against the UN's refusal to recognise the communist government of China. If they were present, they could have vetoed the decision. So, a large army, led by MacArthur, pushed the North Koreans back to the Chinese border. China then joined in on the North Korean's side. MacArthur suggested a nuclear strike. Truman saw the possible effects of the strike and so duly sacked MacAthur. He then made peace and Korea remained divided as it was. Looking at this evidence, it is fair to say that the Berlin Crisis was an important part of the Cold War but it definitely wasn't the only important part or the only factor of the Cold War. Anthony Cowan ...read more.