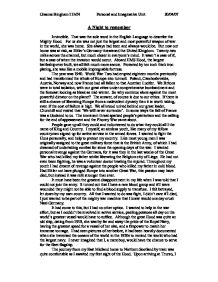 A Night to remember - Invincible. That was the sole word in the English Language to describe the Mighty Hood.

A Night to remember Invincible. That was the sole word in the English Language to describe the Mighty Hood. For us she was not just the largest and most powerful weapon of war in the world, she was home. She always had been and always would be. But now our home was at risk, as Hitler's Germany threatened the United Kingdom. Twenty-two miles across the channel, but much closer in everyone's mind. It wasn't a case of if, but a case of when the invasion would occur. Aboard HMS Hood, the largest battleship ever built, we all felt much more secure. Protected by ten inch thick iron plating, she was like a mobile impregnable fortress. The year was 1940. World War Two had erupted eighteen months previously and had transformed the whole of Europe into turmoil. Poland, Czechoslovakia, Austria, Norway and now France had all fallen to that Austrian Lucifer. We Britons were in total isolation, with our great cities under comprehensive bombardment and the forecast looking as bleak as mid-winter. So why continue alone against the most powerful dictator on the planet? The answer, of course is due to our ethics. If there is still a chance of liberating Europe from a malevolent dynasty then it is worth taking, even if the cost of failure is high. We all stood united behind our great leader, Churchill and vowed that 'We will never surrender'. In some ways the fall of France was a Godsend to us. The imminent threat sparked people's patriotism and the calling for the end of appeasement and the Phoney War came about. People gave up all they could and volunteered to do what they could all I the name of King and Country. I myself, an aimless youth, like many of my fellow countrymen signed up for active service in the armed forces. I wanted to fight the Huns personally, and help to protect my country. ...read more.

As a result, the next morning I felt more relaxed and able to continue with the job that I was allocated to. Out on the deck I saw icicles form upon the gargantuan gun turrets, almost like giant limestone stalactites clinging on to a cave roof. The temperature had noticeably dropped over night; the metal-plated deck was now an awkwardly shaped ice rink. If the temperature was this cold already (by my guess around twenty five degrees Fahrenheit) and we hadn't even passed into the Denmark Strait, I wondered what it would be like there. As the day peeled itself away I once again became more enthusiastic for battle. I wanted something to happen, no matter how minor, just so long as I could see some action. Little did I know that in Stockholm major events were occurring. Sweden, although officially a neutral country had surveillance photographs that were thought may be of use to the British admiralty, so in less than two hours after they had been taken, they were on the British Ambassador's desk. The break they had finally been waiting for had finally arrived. These vital photographs clearly showed the German Battleship Bismarck off of the Swedish coast waiting while her consort vessel, the Prinz Eugen had a re-fuel and re-oiled. The Bismarck was on her way, so therefore a great battle between herself and the Royal Navy vessels guarding the route that she would take would occur in the near future. Our captain was of course informed at once, and he relayed it to us. As a battle possibly loomed over us, I was told to work for the rest of the day until ten o'clock so that our food supplies would be high enough if we encountered some action the following day. I was happy to follow his instructions as this meant that tomorrow I would be allowed up on deck B to help in any way I could with the battle. ...read more.

Just as I was pondering over this, the moment I had waited for came. I spotted a ship heading directly for me; I paddled towards it, the moonlit hull reflected the stars that guided me towards salvation. The small vessel had searchlights on and I managed to paddle into a lit-up area. I don't know how they saw me, but they did. I was rescued by a small British freighter that had been ordered by the Prince of Wales to pick up survivors. On board I was given whisky and coffee, and I recovered from the cold. I learned that there were other survivors on board, who I met with. There were two others. Three survivors out of a crew of fourteen hundred. I don't know what was more depressing, the loss of human life or the loss of the ship. At that moment in time all that I wanted was to go home, go to bed and wake up from this nightmare. I reached Britain five days latter and was surrounded by media attention, which I did not appreciate at all. One thing of great interest that I did learn was that the Royal Navy had sent every available ship in its fleet to 'Sink the Bismarck', which would have failed if it hadn't have been for the Ark Royal which paralysed the Bismarck when one of its Swordfish biplanes immobilised the Bismarck's rudder, allowing the Grand Fleet to catch up with her. She was pounded by over fifty ships and sank after being torpedoed. There were only a hundred and twenty survivors out of the larger crew of two thousand. And did I feel avenged by the sinking of the Bismarck? The answer, no, as I had learnt that all those who had perished, no matter what nationality they were, were human beings. The allied victory did not give me comfort, as there are no winners in war, only losers. And what of my fallen comrades? They will live forever, as we will remember them. ...read more.