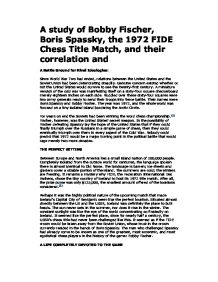 A study of Bobby Fischer, Boris Spassky, the 1972 FIDE Chess Title Match, and their correlation and A Battle Ground for Rival Ideologies.

A study of Bobby Fischer, Boris Spassky, the 1972 FIDE Chess Title Match, and their correlation and A Battle Ground for Rival Ideologies: Since World War Two had ended, relations between the United States and the Soviet Union had been deteriorating steadily. Genuine concern existed whether or not the United States would survive to see the twenty-first century. A miniature version of the cold war was manifesting itself on a sixty-four square checkerboard merely eighteen inches on each side. Huddled over these sixty-four squares were two army generals ready to send their troops into fierce battle. Their names were Boris Spassky and Bobby Fischer. The year was 1972, and the whole world was focused on a tiny isolated island bordering the Arctic Circle. For years on end the Soviets had been winning the word chess championship.(1) Fischer, however, was the United States' secret weapon. In the possibility of Fischer defeating Spassky lay the hope of the United States that if they could finally triumph over the Russians in a simple game of chess, then they could eventually triumph over them in every aspect of the Cold War. Nobody could predict that 1972 would be a major turning point in the political battle that would rage merely two more decades. THE PERFECT SETTING Between Europe and North America lies a small island nation of 200,000 people. Completely isolated from the outside world for centuries, the language spoken there is almost identical to Old Norse. The landscape is barren; ice sheets and glaciers cover a sizable portion of the island. The summers are cold; the winters are freezing. It remains a mystery why FIDE, the Federation International Des Eschecs, chose the tiny country of Iceland to host its 1972 title match. After all, the prize purse was only $125,000, the smallest amount offered of the locations considered.(2) Perhaps it was the highly political nature of the upcoming match that made Iceland's Capital City of Reykjavik seem like the perfect location. ...read more.

Why is it, then, that only Nixon could go to China? The American people viewed Richard Nixon as a hard-core conservative and a rabid anti-Communist. Only a leader as fiercely opposed to the Communists as Nixon could successfully convince the American people that a trade agreement with a Communist nation would be for their own good. A liberal who had the reputation of either being indifferent to communism or, even worse, caring about the well-being of the communist nations would have watched helplessly as his approval ratings dropped off sharply, virtually guaranteeing his failure to win re-election. Fischer, too, was a rabid anti-Communist. He was a paranoid lunatic convinced that anything causing him to play poorly was a secret evil plan of the Russians, thought up to guarantee Fischer's elimination and to guarantee that the world chess crown would remain Soviet property. As with Nixon, the American chess community was so weary of the constant Soviet domination of the game that they truly believed Fischer was their only hope. Not only was he an amazingly good chess player, but he was so paranoid and so completely unpredictable that he had the power to destroy the Soviets both on and off the chessboard. LET THE POLITICAL CHESS BEGIN Saturday, 1 July 1972. Fischer and Spassky arrived in Iceland, drew for the first game, and sat down at the chessboard - or so it was planned. The reality, mostly due to Fischer's temperament, was that the chess game had already begun long before either Spassky or Fischer pushed a pawn. On that Saturday, only Spassky and his delegation were in Iceland for the opening ceremony. Fischer was in an apartment several thousand miles away from Reykjavik complaining about the financial end of the match. He demanded thirty per cent of the gate receipts, a sizable portion of the film and television revenue, and wanted to have the loser's share of the purse in his hand as he landed in Iceland.(17) ...read more.

By the time 1991 rolled around, the scene had changed dramatically. For once, it appeared to the American people that perhaps the Soviet Union was on its last leg. They were right. Years and years of horrendously wasteful military spending had finally bankrupt the Communist Russian Empire. The residents of the USSR's republics had finally had enough of the old Soviet Regime, and began to revolt. In no time at all, the USSR was no longer a union of republics - it consisted only of Russia. The Soviet Union was declared dead in the water in December of 1991. Waves of shock and joy rippled through the American public. Was the Cold War really over? The answer came from none other than Bobby Fischer himself. Lured out of hiding by a Serbian millionaire offering five million US dollars in a rematch against Boris Spassky, Fischer was ready to declare the cold war officially over by doing what he did best: beating the Russians at chess. Of course, nothing had changed about Fischer - he was still the same old Bobby, complaining about everything imaginable and making a fuss about everything else. Unfortunately, the government of the United States didn't see Bobby as their anti-Soviet secret weapon anymore. Economic sanctions effectively made it illegal for Fischer to play and accept the prize money. In a pre-match press conference, Fischer held up the notice and spat on it. But Fischer was still the same old complaining chess master. He even went so far as to demand that the noise from the nearby war not interfere with his concentration. Fischer was Fischer, and Spassky was Spassky, and just like in Reykjavik twenty years previously, Fischer won the match. Unfortunately, the United States put out an arrest warrant for Fischer, sending him into seclusion once again. A stanza which Tim Rice wrote for a stage musical perfectly captures the role chess had finally taken in international politics: How sad to see What used to be A model of decorum and tranquility Become like any other sport A battleground for rival ideologies To slug it out with glee. ...read more.