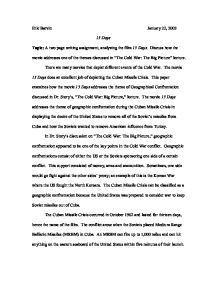 A two page writing assignment, analyzing the film 13 Days. Discuss how the movie addresses one of the themes discussed in &quot;The Cold War: The Big Picture&quot; lecture.

Eric Barvin January 22, 2003 13 Days Topic: A two page writing assignment, analyzing the film 13 Days. Discuss how the movie addresses one of the themes discussed in "The Cold War: The Big Picture" lecture. There are many movies that depict different events of the Cold War. The movie 13 Days does an excellent job of depicting the Cuban Missile Crisis. This paper examines how the movie 13 Days addresses the theme of Geographical Confrontation discussed in Dr. Story's, "The Cold War: Big Picture," lecture. The movie 13 Days addresses the theme of geographic confrontation during the Cuban Missile Crisis in displaying the desire of the United States to remove all of the Soviet's missiles from Cuba and how the Soviets wanted to remove American influence from Turkey. ...read more.

Sometimes, one side would go fight against the other sides' proxy; an example of this is the Korean War where the US fought the North Koreans. The Cuban Missile Crisis can be classified as a geographic confrontation because the United States was prepared to consider war to keep Soviet missiles out of Cuba. The Cuban Missile Crisis occurred in October 1962 and lasted for thirteen days, hence the name of the film. The conflict arose when the Soviets placed Medium Range Ballistic Missiles (MRBM) in Cuba. An MRBM can fire up to 1,000 miles and can hit anything on the eastern seaboard of the United States within five minutes of their launch. ...read more.

The film also does a good job of portraying the Soviet standpoint. The United States had nuclear missiles positioned in Turkey that threatened the Soviets. The film discusses the role that the US' missiles in Turkey played in negotiations to get the Soviets to remove their missiles from Cuba. The film portrays the Cuban Missile Crisis from the point of view of an American official. The movie portrays the suspense, the lack of sleep and the conflicts within each side. The problem with the film is that Robert Kennedy, the attorney general at the time, wrote the book that this film portrays. Obviously, he tries to portray President Kennedy, his brother, in a heroic manner, not a Soviet official. Overall this film was excellent and is entertaining on an educational, as well as, dramatic level. ...read more.