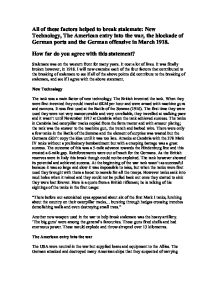 All of these factors helped to break stalemate: New Technology, The American entry into the war, the blockade of German ports and the German offensive in March 1918.How far do you agree with this statement?

All of these factors helped to break stalemate: New Technology, The American entry into the war, the blockade of German ports and the German offensive in March 1918. How far do you agree with this statement? Stalemate was on the western front for many years. It cost a lot of lives. It was finally broken however, in 1918. I will now examine each of the four factors that contributed to the breaking of stalemate to see if all of the above points did contribute to the breaking of stalemate, and see if I agree with the above statement. New Technology The tank was a main factor of new technology. The British invented the tank. When they were first invented they could travel at 6KM per hour and were armed with machine guns and cannons. It was first used at the Battle of the Somme (1916). The first time they were used they were not very manoeuvrable and very unreliable, they travelled at walking pace and it wasn't until November 1917 at Cambria when the tank achieved success. The tanks in Cambria had caterpillar tracks copied from the farm tractor and with armour plating; the tank was the answer to the machine gun, the trench and barbed wire. ...read more.

The German attacked and destroyed many American ships that they suspected of carrying supplies to the Allies. They also sank passenger ships killing many Americans; Germany attacked many American ships using submarines. When the USA discovered that Germany had tried to ally with Mexico this was the last straw for the Americans and they declared war on Germany. The Americans declared war on Germany on 1st April of 1917. With the USA joining the war so late the war did not hit them economically as much as the rest of Europe. With Russia making peace with Germany America joined the war just in time for the Allies, but the American did not arrive in great forces. However with America joining the war this gave the Allies a huge economic boost and America brought some highly trained scientist and this improved the technology used. Blockading of German ports Throughout the war both sides tried to prevent the other side from getting supplies. The British had been blockading German ports since 1914. The blockade was supposed to strangle German industry so it couldn't supply the German industry. ...read more.

So I do agree with statement I think they all equal in the break up of stalemate. All of these points link together in one-way or another. The American entry into the war was partly a result to Germany submarine attacks on American ships, and German submarine warfare was a result of the blocking of German ports. Another link to American entry into the war is with new technology was partly because America brought the money and the scientists to research for the tanks. A third link with the American entry into the war was to do with the German offensive. This is because the Americans kept sending troops that stopped the Germans advancing any more and this gradually helped win the war. Another link is between The German offensive and new technology. The reason for this link is as a result of the use of the tanks the Germans had to come back with something so they brought in highly trained troops and used counter attacks. So all the elements played are part in the break of stalemate. Without anyone of the elements the break of stalemate would not have happened in the way that it did and it would not have happened in the time that it did. ...read more.

In places, this response has detailed knowledge and a clear understanding of the key developments that led to the end of fighting on the Western Front. However, points could be linked more clearly back to the question, with more analysis and less narrative. 3 out of 5 stars.