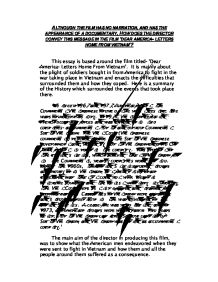 Although the film has no narration, and has the appearance of a documentary, How does the director convey this message in the film 'dear america- letters home from vietnam'?

ALTHOUGH THE FILM HAS NO NARRATION, AND HAS THE APPEARANCE OF A DOCUMENTARY, HOW DOES THE DIRECTOR CONVEY THIS MESSAGE IN THE FILM 'DEAR AMERICA- LETTERS HOME FROM VIETNAM'? This essay is based around the film titled- 'Dear America- Letters Home From Vietnam'. It is mainly about the plight of soldiers bought in from America to fight in the war taking place in Vietnam and enacts the difficulties that surrounded them and how they coped. Here is a summary of the History which surrounded the events that took place there. 'Between 1965 and 1975, America fought the Communist Vietnamese in one of the most destructive wars in modern history. In 1954, Vietnam defeated French occupying forces and was divided into two countries- a Communist North and on non- Communist South Vietnam. The Viet Cong (Vietnamese communists) rebelled against the South Vietnamese government and, helped by North Vietnam under Ho Chi Minh, fought to reunite the country. This brought in the united states, which believed that if Vietnam fell to the Communists, nearby countries would fall too. During the 1960s, the United States poured troops and money into Vietnam, but found itself in an undeclared war that it could not win. Despite intensive bombing and the latest military technology, the Viet Cong were better equipped and trained for guerrilla warfare. ...read more.

There are some scenes which could have been cut to promote the fact that the America boys were the ones that were lost out or other such like factors to fit in with the probably biased viewpoint of the director, or the way that the director wants to put the film across to its audience. The footage was most probably taken by US journalists, sent to Vietnam to report on what was going on. These journalists would most definitely have biased view points and would probably record and report on what they believe right and wrong about the situation and they would have definitely been instructed to record only how the war was affecting the American soldiers, as at that time in America, the Viet Cong were viewed as evil and the American soldiers were there to 'save the day'- so to speak and so the footage would have been recorded to suit this point of view. Even thought any scenes of the war weren't re-enacted, the voices behind the actual letters were. This would mean, that the way that the actors/actresses recited the letters, might not have been the way the people who wrote the letters themselves, would have felt. The kind of emotion that these actors would have projected in their voices, would have probably affected the audience reacted to the letters. ...read more.

A way in which contrast is used during the film is when all the soldiers are playing on the beach before they go to war, and seeing how happy they are, and then, moments later, they are all in helicopters with guns. dressed in uniform. This shows how easily boys can turn into men and how easily they can seem less innocence. This is also shows when, if comparing these first few scenes of the boys when they are happy and carefree, to the scenes of when the soldiers are destroying the houses and burning them up and torturing people, it show a sort of downfall from innocence, and how much the war affects the soldiers and turns them into something they once weren't. Another example of contrast is when the film showed a rather meek looking boy at the start of the film checking into a training camp to become a soldier, and then, the soldiers again fighting. This indicates the point mentioned in the afore written contrast in the film. The film sets out with the intention of informing the nation of the horrors that took place in Vietnam and how the people in it suffered, but it was most definitely biased towards the Americans. The tension is present in the film from the start, but it is clear that as the film goes on, there is more aggression, building up, until a final emotional ending. ...read more.