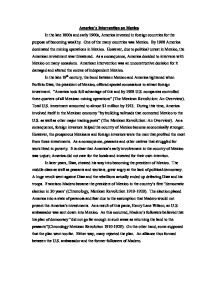 America's Intervention on Mexico In the late 1800s and early 1900s, America invested in foreign countries for the purpose of becoming wealthy. One of the many countries was Mexico. By 1908 America dominated the mining operations in Mexico. However, due to political unrest in Mexico, the American investment was threatened. As a consequence, America decided to intervene with Mexico on many occasions. American intervention was an unconstructive decision for it damaged and altered the course of independent Mexico. In the late 19th century, the bond between Mexico and America tightened when Porfirio Diaz, the president of Mexico, offered special concessions to attract foreign investment. "America took full advantage of this and by 1908 U.S. companies controlled three quarters of all Mexican mining operations" (The Mexican Revolution: An Overview). Total U.S. investment amounted to almost $1 million by 1913. During this time, America involved itself in the Mexican economy "by building railroads that connected Mexico to the U.S. as well as other major trading posts" (The Mexican Revolution: An Overview). As a consequence, foreign investors helped the country of Mexico become economically stronger. However, the prosperous Mexicans and foreign investors were the men that profited the most from these investments. ...read more.

Wilson authorized arms sales to the revolutionaries, while refusing to allow weapon sale to Huerta's forces. It was obvious to see that America intervened with the dilemmas of Mexico by allowing Henry Lane Wilson to ally with the rebellious group. This thus, began the civil war. If the Wilson did not help start the Civil War, the lives of countless Mexicans would have never been lost. As the Civil War raged on, President Woodrow Wilson feared that the rebellions would be unable to defeat Huerta's forces in the war. At first however, America did not take part in the war. Nonetheless something occurred that led Wilson into another intervention with Mexico. Huerta's soldiers arrested several crewmembers from the USS Dolphin for going ashore for supplies at the Mexican port of Tampico. Although the soldiers were released unharmed, Wilson demanded an apology and that Mexico would "hoist the American flag in a prominent position and salute it with twenty-one-guns" (Woodrow Wilson 1856-1924). Huerta apologized but would not perform the ceremony. Wilson then decided to go to Congress and ask for the declaration of war. However, before Congress could act, Wilson learned that a "German ship full of arms, was heading for Huerta's troops in Veracruz" (Thomas Woodrow Wilson 1913-1921). ...read more.

In return however, Wilson asked Carranza "to adopt a measure that would allow the United States to intervene in Mexico to protect U.S. investment." Carranza refused. But the U.S. luck changed when forces loyal to Alvaro Obregon, another power hungry Mexican that thought he should be president, executed Carrazna. Obregon then created a new constitution that protected the U.S. investment. The fact that America went into Mexico without asking Mexico's permission made this intervention a controversial issue. America's intervention in the country of Mexico changed the country's fate dramatically. For one thing, Madero, a democratically elected president that wanted to improve the life of Mexicans, was arrested because the U.S. supported the rebels. This incident thus connects the U.S. to Huerta meaning that, for the gain of either money or power, the U.S. would go as far as to kill someone that has been chosen by the Mexicans. Not only does this destroy the whole concept of democracy but also this specific incident began an unnecessary civil war. Madero, if he was never arrested and killed, contained the potential to improve the life of a Mexican. He believed in democracy and he wanted to help the many Mexicans that were in poverty. But the American interference changed all this and therefore, it is clear to say that the interventions were uncalled for. ...read more.