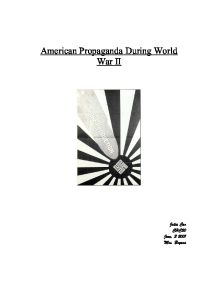 American Propaganda During World War II Julia Cao CHC20 June, 3 2001 Mrs. Bryans American Propaganda During World War II Propaganda: information and opinions (esp. prejudiced ones) spread to influence people in favour of or against some doctrine or idea. Americans used this in a variety of methods to provide a black and white view of different countries with half-truths or misleading information. Some of the most effective methods that they used to bring the message out were cartoons, movies, posters, and the type of colours. One of the ways of showing how bad the Germans or the Japanese were was through cartoons. They would show this with a stamp engraved with either the swastika or the sun (symbol of the Japanese) coming out of the air and marking a country. Then, black and white ink would move out across the map to represent all the countries that these evil leaders had taken over.1 This was very important because it was factual and had a big impact about what was happening around world through some simple animations. ...read more.

They were usually back-to-back films and there was usually a short clip in between two shows to keep the audiences interested.3 Cartoons were one of the many kinds of short clips that they would show at this time because cartoons weren't made for just kids or adults, but for everybody to enjoy. Because of its simplicity, humor and straightforward points, audiences loved watching it. Cartoons was more cost effective for companies to make it, and it was more interesting for audiences to watch. People didn't really want to know about reality and what might happen to you in the war. They wanted a fantasy that would give a "sense of patriotism" and a chance to release their built-up energy and laugh. Donald Duck was very popular in Disney wartime movies because he was so quick-tempered and you could take him a lot further than you could have with Mickey Mouse. In the Warner Brothers Studios, Bugs Bunny became a big hit and they actually surpassed Disney with the number of audiences. ...read more.

I feel that the methods that the Americans used to influence its citizens worked effectively even though most of the information that they used were either quite unmoral and most of the time, quite misleading. It lifted people's spirits and influenced more people to get involved with the war. I just did not like the fact that there was so much racism and prejudice against every other nationality. But then again, most of the people weren't as well mannered or well educated about other societies as they are today. After the war, all the World War Two movies and posters were put back onto the shelf or else thrown out. The society had changed by then and racism was not as acceptable anymore. It was really quite embarrassing to show any of those films to anybody. Some of the animators say that looking back now, they feel horrible to do such things to the Japanese and the Germans. But at that time, it was necessary to have these animations produced because that's what the people wanted to see.5 American propaganda hasn't disappeared form today's society but it has changed from discriminating other people to putting themselves at a higher level compared to others. ...read more.