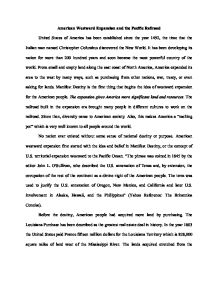 American Westward Expansion and the Pacific Railroad United States of America has been established since the year 1492, the time that the Italian man named Christopher Columbus discovered the New World. It has been developing its nation for more than 200 hundred years and soon became the most powerful country of the world. From small and empty land along the east coast of North America, America expanded its area to the west by many ways, such as purchasing from other nations, war, treaty, or even asking for lands. Manifest Destiny is the first thing that begins the idea of westward expansion for the American people. The expansion gives America more significant land and resources. The railroad built in the expansion era brought many people in different cultures to work on the railroad. Since then, diversity came to American society. Also, this makes America a "melting pot" which is very well known to all people around the world. No nation ever existed without some sense of national destiny or purpose. American westward expansion first started with the idea and belief in Manifest Destiny, or the concept of U.S. territorial expansion westward to the Pacific Ocean. "The phrase was coined in 1845 by the editor John L. O'Sullivan, who described the U.S. annexation of Texas and, by extension, the occupation of the rest of the continent as a divine right of the American people. ...read more.

Some went all the way to search for farmland. Many more visited California searching for gold. The glory years of the Oregon Trail finally ended in 1869, when the transcontinental railroad was completed. Because of the war with Mexico during the year 1846 to 1848, United States in 1846 claimed the occupation of New Mexico as its territory the land between the Nueces River and the Rio Grande. Moreover, Upper California was first like a piece of mature fruit ready to fall from a tree, in addition with these reasons: the far distance from the central government in Mexico City and the province was populated by independent people. They obviously made some prominent native Californians believed their land would be better under control of the United States. Therefore, the California State came to the union officially at the same time as New Mexico by the Treaty of Guadalupe Hidalgo that ended the Mexican War in 1848. The expansion to the west was brought by the railroad like the Oregon Trail that led people to settle in Oregon State. The other famous railroad that is another factor moving people to the west is the transcontinental railroad. "The idea of a transcontinental railroad across North America was first seriously pursued by the head engineer of the Sacramento Valley Railroad. One of the most difficult problems facing him was crossing the Sierra Nevada Mountains. The Rockies had several relatively easy passes through it. The Sierra Nevadas were relentless, however. ...read more.

Engine 119 and the Jupiter inched forward until they gently touched each other. The engineers of the trains broke champagne on each other's engine. After a series of speeches an elaborate lunch was served on Governor Stanford's private car for all the dignitaries while the crowd ate buffalo humps and drank whiskey all provided by the Central Pacific. As dusk fell, the two special trains backed away from each other. The Jupiter headed to San Francisco and the Number 119 went to New York. That night a torchlight parade, a banquet, and a grand ball were held at Promontory Point. Since then, the transcontinental rail road made the rate of immigration to the west increase. People started to move west in order to find new land and resources. Also, people around the world started to move and settle in United States mostly along the west coast. Chinese, Japanese, all kind s of European people were easily found in the western states, especially California. Many famous occasions occurred in the west, such as the story about the California gold rush, the rumor about the white people versus the Indians, and so forth. All of these things in the west made America a complete nation like today. If American people along the east coast never expanded its nation to the west, there would now not be the powerful nation called the United States of America like today. "Melting-pot," or the phrase that obviously stereotypes the American nation, caused by this expansion to the west. Cultures and population were brought. Finally, it all made America complete America. 2 ...read more.