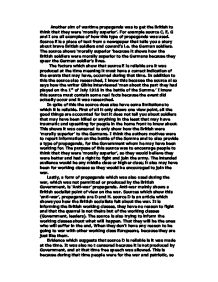 Another aim of wartime propaganda was to get the British to think that they were 'morally superior'. For example source C, E, G and I are all examples of how this type of propaganda was used. Source E is a piece of text from a newspaper that tells you a story about brave British soldiers and coward's i.e. the German soldiers. The source shows 'morally superior 'because it shows how the British soldiers were morally superior to the Germans because they spear the German soldier's lives. The factors which show that source E is reliable are it was produced at the time meaning it must have a correct indication of the events that may have, occurred during that time. In addition to this the source also researched, I know this because the source also says how the writer Gibbs interviewed 'men about the part they had played on the 1st of July 1916 in the battle of the Somme.' I know this source must contain some real facts because the event did actually occur and it was researched. In spite of this the source does also have some limitations to which it is reliable. First of all it only shows one view point, all the good things are accounted for but it does not tell you about soldiers that may ...read more.

It is reliable for these exact reasons; it is a researched source and it shows correct occurrences of events during wartime. However there are some limitations to this source for a historian trying to learn about propaganda in World War One, for example it wasn't produced at the time, making it a secondary source therefore meaning that every thing might not been 100% accurate to what might have actually occurred during the time of the event in hand. Another point which shows some unreliability in the source is that it is a fictional piece of writing, meaning that it was written strictly for entertainment values. In comparison to this the source is only written by an author called John Harris, this means that most of the novel is just a figment of his imagination that means at least some of it must have been made up. Also the author is a British man; this may mean that he wanted to show Britain in a good light. I don't believe this source is particularly written for a certain group of people but can be read and enjoyed by many. Source B is useful for a historian trying to learn about propaganda in World War One because it was written at the time making it a primary source. ...read more.

thus meaning the author motives were to get the middle classes to hate the Germans and join the war because it shows what will happen if they do not. I think the author intended it for the middle classes because the British magazine punch was mainly written for middle classes. Contradictory to this, source D was written to discourage people from going to war, meaning that the authors motives were to reveal the governments real motives of going to war and to inform the working classes what they were getting there selves into by going to war, in hope that working classes would be discouraged from going to war. The attitude of the majority of people at the beginning of World War one was hope full and patriotic, as people thought it would be a quick war. This is reflected in source c. However at the beginning of the war there were other views expressed such as antiwar, socialist views for example the labour party. Source D reflects the attitude that there is no reason to fight others who are just like you 'whom you have no quarrel with.' So the main reasons why the sources show such different attitudes are at the beginning of the war free speech was allowed media was not censored so antisocialist ?? ?? ?? ?? ...read more.