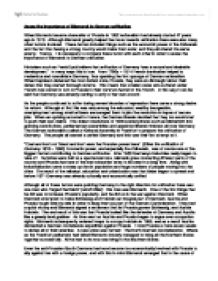 Asses the importance of Bismarck to German unification

Asses the importance of Bismarck to German unification When Bismarck became chancellor of Prussia in 1862 nationalism had already started 47 years ago in 1815. Although Bismarck greatly helped the move towards unification there were also many other factors involved. These factors included things such as the economic power of the Zollverein and the fact that having a strong country would make them safer, and they all shared the same enemy: France. It is necessary to compare these factor with each other in order to asses the importance of Bismarck to German unification. Historians such as Frank Eyck believe that unification of Germany 'was a natural and desirable development.' In many ways this is true. From 1790s - 1814 French domination helped to modernize and consolidate Germany, thus sparking the first upsurge of German nationalism. When Napoleon defeated the most defiant state, Prussia, they were so distraught about their defeat that they started thorough reforms. This meant that smaller states who suffered under French rule started to turn to Prussia in their common hatred of the French. ...read more.

After 1850 Germanys industries really began to take off. Factories were built at a spectacular rate, railroads grew connecting different parts of the country and Prussia had one of the best education rates to be seen in a long time. Along with industrialization came a steep up rise in population and huge numbers of people moving into the cities. The result of the railways, education and urbanization was that ideas began to spread and before 1871 Germany was already culturally and economically unified. Although all of these factors were pointing Germany in the right direction for unification there was one man who 'forged the Reich' (Adolf Hitler): this man was Bismarck. One of the first things that he did was to increase Prussia's popularity, and he did so in the war against Denmark. When Denmark attempted to make Schleswig and Holstein an integral part of Denmark, Austria and Prussia fought side by side in order to keep them as part of the German Confederation. ...read more.

The French pressured Prussia not to accept this offer, but unfortunately they pushed it too far. They demanded that no Prussian Prince would ever take the Spanish crown. Bismarck then published these diplomatic communications in a provocative manner, angering the French into declaring war on Prussia. The south German states came to their aid and they had a glorious victory. Meanwhile Bismarck won the consent of the South German states to unite Germany with Prussia at its head. He had achieved his task and in January 1871 the Prussian King proclaimed the German empire. The proclamation of the German empire was the result of a long process to which many factors contributed to. 'German unification was, on the part of Bismarck, a series of favorable situations wisely grasped' (Aronson, the Kaisers) Although the Zollverein, Prussia's military power and industrialization all pointed Germany in the right direction of unification it would have taken many more years, or perhaps never, for Germany to unify. Bismarck took the pieces of jigsaw and put them all together to give us united Germany. Mhairi Thomson 5s2 Word count: 891 ...read more.