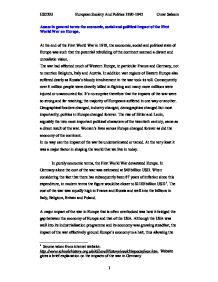 Assess in general terms the economic, social and political impact of the First World War on Europe

Assess in general terms the economic, social and political impact of the First World War on Europe. At the end of the First World War in 1918, the economic, social and political state of Europe was such that the potential rebuilding of the continent seemed a distant and unrealistic vision. The war had affected much of Western Europe, in particular France and Germany, not to mention Belgium, Italy and Austria. In addition vast regions of Eastern Europe also suffered dearly as Russia's bloody involvement in the war took its toll. Consequently over 8 million people were directly killed in fighting and many more millions were injured or unaccounted for. It's no surprise therefore that the impacts of the war were so strong and far reaching; the majority of Europeans suffered in one way or another. Geographical borders changed, industry changed, demographics changed but most importantly, politics in Europe changed forever. The rise of Hitler and Lenin, arguably the two most important political characters of the twentieth century, came as a direct result of the war. Women's lives across Europe changed forever as did the economy of the continent. In no way can the impact of the war be underestimated or tamed. ...read more.

People enjoyed disposable incomes again as well as longer leisure time and essentially stability. Psychologically it was seen as a period that was even better to live in than pre war Europe. In reality this was not necessarily true in all cases, as the war still lived rife among most people's minds. Anything was better than the war, and signs of prosperity and enjoyment of life again were thrived upon. Across Europe in the immediate aftermath of the war there was a vast mixture of feelings. In Germany the Treaty of Versailles caused much humiliation. Germany was forced to accept responsibility for the outbreak of the war and the subsequent death toll, not to mention losing the majority of its Army and military strength. In a strange way it can be argued that this exaggerated the nationalist pride among the German people. Although they had been humiliated and lost the war, they were effectively alone and only had one another. Therefore solace was found in keeping faith with the motherland and each other. It was through this attitude that Hitler's rise to power was so prominent. He promised to make Germany a power once again and this won the hearts and minds of many people across Germany. ...read more.

These two factors alone critically shaped the world we live in today and what events have taken place since 1918. In my opinion, the emergence of the USA as a major world power was helped by the war. The USA helped in the war without any physical or real economic damage the war brought Europe and the USA closer in real economic terms. Socially the war did destroy Europe yet it can be argued that issues such as higher employment for women and the beginning of a new prosperous era in the twenties owed themselves to the outbreak of the war. Women's rights were now stronger than ever before and a new society was emerging as a result - the equal society. Economically, the war devastated Europe. Every European economy suffered through the war and trading amongst European countries never really recovered. Through the political change in Europe, the economy suffered and this effectively allowed the USA to catch up and overtake the European economy in the preceding years of the war. Although many short term problems were created by the war, in my opinion, the long term problems far outweighed those in the short term. These long term factors effectively led to the Second World War and the outbreak of the Cold War. Effectively the war shaped the Twentieth Century as we now know it. ...read more.