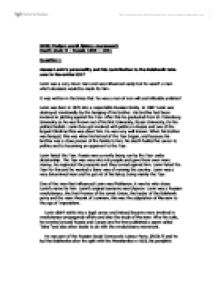 GCSE Modern world history coursework Depth study B - Russia 1905 - 1941 Question 1 Assess Lenin's personality and his contribution to the Bolshevik take over in November1917 Lenin was a very clever man and was influenced easily but he wasn't a man who's decisions would be made for him. It was written in the times that 'he was a man of iron will and inflexible ambition' Lenin was born in 1870 into a respectable Russian family. In 1887 Lenin was destroyed emotionally by the hanging of his brother. His brother had been involved in plotting against the Tsar. After this he graduated from St. Petersburg University as he was thrown out of his first University, Kazan University, for his political beliefs. Lenin then got involved with politics in Russia and one of the largest Okrahna files was about him. He was very well known. ...read more.

Lenin didn't settle into a legal career and instead became more involved in revolutionary propaganda efforts and also the study of Marxism. After his exile, he traveled around Russia and Europe and he then published a paper called "iskra" and also other books to do with the revolutionary movement. He was part of the Russian Social Democratic Labour Party, (RSDLP) and he led the Bolsheviks after the split with the Menshaviks in 1903, his pamphlet "what is to be done" inspired this. In 1906 he was elected the Presidium of the RSDLP. Now that he was higher up and the leader of the Bolsheviks he could start planning and thinking about the revolution, he wasn't going to rush things. Lenin and the Bolsheviks overthrew the provisional government that was originally set up by Tsar Nicholas II. Lenin waited patiently until the time was right for the revolution. ...read more.

This all happened very quickly and the Bolsheviks had taken over by November 1917. Being a very patient man Lenin managed to use his time right. When the Provisional Government was weak he made his move. The Provisional Government was weak when it was in the middle of the war, know body trusted them and they lost their support. Lenin then gained the people support and succeeded to overthrow the Provisional Government. "The Provisional Government has been overthrown. The cause for which the people have fought has been made safe: the immediate proposal of a democratic peace, the end of land owners' rights, workers control over production, the creation of a soviet government. Long live the revolution of workers, soldiers and peasants this was a proclamation of the Petrograd Soviet." With Lenin being a very patient man and by having an eye for detail the revolution happened. His plans were very precise and he had the upper hand when it came to politics as his father was a politician and he was into politics from a very early age. Anuraag Jain ...read more.