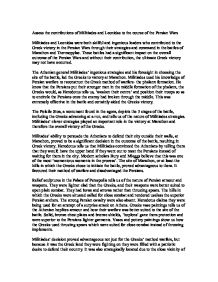 Assess the contributions of Militiades and Leonidas to the course of the Persian Wars Militiades and Leonidas were both skilful and ingenious leaders who contributed to the Greek victory in the Persian Wars through their strategies and command in the battles of Marathon and Thermopylae. These battles had a significant impact on the overall outcome of the Persian Wars and without their contribution, the ultimate Greek victory may not have occurred. The Athenian general Militiades' ingenious strategies and his foresight in choosing the site of the battle, led the Greeks to victory at Marathon. Militiades used his knowledge of Persian warfare to reconstruct the Greek method of warfare- the phalanx formation. He knew that the Persians put their stronger men in the middle formation of the phalanx, the Greeks would, as Herodotus tells us, 'weaken their centre' and position their troops so as to encircle the Persians once the enemy had broken through the middle. ...read more.

Greeks vase paintings tells us of the Athenian hoplites armour and how their warfare was better suited to the site of the battle. Solid, bronze chest plates and bronze shields, 'hoplons' gave them protection and were superior to the Persians lighter garments. Vases and pottery paintings show us how the Greeks used thrusting spears which were suited for close combat instead of throwing implements. Militiades' decision proved advantageous not just for the Greeks' method warfare, but because it was the Greek land they were fighting on they were filled with a patriotic desire to defend their country. It was also strategically located due to the close vicinity of Athenian roads, so the Greeks could chose the best time to engage in battle. Militiades' persuasive skills and his foresight and intelligence in choosing the site of Marathon was paramount in the outcome of the Persian Wars; Greek victory as the battle of Marathon demonstrated to Darius the Greeks were capable of defeating the Persians. ...read more.

The discovery of the Themistocles decree sheds light on the consequent evacuation of Athens and Leonidas' goal in the holding of Thermopylae. The Decree is dated to the 3rd century BC, but is believed to have been a copy of a decree by Themistocles that, if authentic, means the evacuation of Athens was planned before Thermopylae, and that victory was not expected, only holding, so that Athens could evacuate their city safely. Herodotus claims, many people were unwilling to leave their city, and were only encouraged to do so by the priestess of the temple of the sacred snake 'the snake fled and the Athenians followed his example'. If Themistocles' decree is authentic, then he must have anticipated the great naval battle at Salamis also. Leonidas' skilful and brave command at Thermopylae allowed Athenians to safely escape their city and while he did not defeat the Persians, a near impossible feat, he held out the Persians from Attica for as long as possible. Militiades and Leonidas both made major contributions to the course of the Persian wars, and their positive input helped the Greeks ultimately defeat the Persians. ...read more.