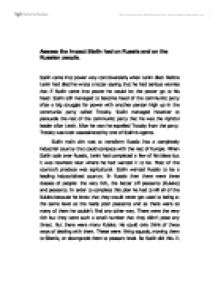 Assess the impact Stalin had on Russia and on the Russian people.

Assess the impact Stalin had on Russia and on the Russian people. Stalin came into power very controversially when Lenin died. Before Lenin had died he wrote a letter saying that he had serious worries that if Stalin came into power he would let the power go to his head. Stalin still managed to become head of the communist party after a big struggle for power with another person high up in the communist party called Trotsky. Stalin managed however to persuade the rest of the communist party that he was the rightful leader after Lenin. After he won he expelled Trotsky from the party. Trotsky was later assassinated by one of Stalin's agents. Stalin main aim was to transform Russia into a completely industrial country that could compete with the rest of Europe. When Stalin took over Russia, Lenin had completed a few of his ideas but it was nowhere near where he had wanted it to be. Most of the country's produce was agricultural. Stalin wanted Russia to be a leading industrialized country. In Russia then there were three classes of people: the very rich, the better off peasants (Kulaks) ...read more.

Many of the things that people had enjoyed before communism had been stopped, such as religion. Stalin had really cracked down on anyone who was involved in religion. People were being persecuted for what they believed in. The secret police were usually the people that found out if any one was having secret masses. They usually dealt with it by exile or even death. Stalin was so strongly anti-religion because of his Marxist beliefs. Also because the Russian Orthodox Church had links with the tsars. Stalin changed so much about the way people worked. It must have come as a great shock to the people of Russia. For example if you wanted to change job in 1926 you needed the permission of your boss. He however was likely to say no unless you were a bad worker. Then he would tell the police and you could be prosecuted because you didn't like your job. If you wanted to join an association it had to be approved by the government otherwise you could be arrested. You could not set up your own business otherwise again you would be arrested or killed. ...read more.

The German assault seemed at first successful but was eventually stopped about 20 miles from Moscow. Stalin had been very paranoid all through his life and towards the end he became extremely paranoid. He started executing members of the opposing governmental parties as he thought they were plotting to assassinate him. He executed between 1.5 and 7 million of his opponents in this 2-year period from 1936 to 1938. This was called the great purge. Stalin was one of the most brutal dictators in all of history but ignoring all the bad things he did there were some big changes made in Russia when he was leader. Amy Knight is a Research specialist on The Soviet Union and this is what she said, "Stalin's historical legacy is overwhelmingly negative. Although his policies transformed the USSR from an agrarian-based society into an industrialized nation with a powerful military arsenal, the transformation was accomplished at the cost of millions of lives. Stalin's militant distrust of the West and his assertion of Soviet dominance in Eastern Europe gave rise to the Cold War. His purges of society through violent police terror left a permanent scar on the collective memory of the people under his rule. Although admired by some Russians, most would agree with the assessment in the West that Stalin was one of the cruelest dictators in history." ...read more.