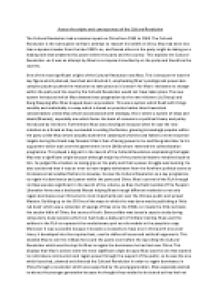 Assess the origins and consequences of the Cultural Revolution in China.

He therefore launched the Cultural Revolution because of the rivalry within the CCP; Mao became determined to regain dominance from the new ministers and saw them as a potential threat, so this forced him to create a programme which would win over the people and convince them that he was better than the new CCP leaders. Furthermore there were divisions within the CCP party called the moderates and Maoists this created a power struggle this became evident this rivalry also caused the Cultural Revolution as Mao wanted to get rid of these divisions in order to eliminate rivalry within the CCP. This also led to the Cultural Revolution as it was used as mechanism to cleanse the CCP of those with the attitude of betrayal (following pragmatism) and to enforce commitment to Maoism. Events leading to the dismissal of the mayor of Beijing triggered the launch as a writer called Wu Han turned his book into a play; Mao thought his play was an attack on him. When he launched attack and published it the mayor of Beijing forbade it to be reprinted there, in the end Zhou decided to sacrifice Peng and Liu went along with it. ...read more.

The least significant consequence was potentially economic. This is because damage the economy was more short term than long term unlike the other consequences. E.g. The Economy suffered. 14% reduction in industrial production in 1967 and further falls in 1968. Agriculture far less affected. However there were some long term consequences: Turmoil in schools and universities meant that education and training stopped which led to industrial and agricultural stagnation the effects of which were to last for decades. In conclusion the most significant reason was Mao as he was the one to plan, launch and direct the revolution to satisfy his hunger for power. In the end he gained the most as once again Mao was the ultimate ruler. In my opinion the younger generation lost the most as they were deprived of an education, and tricked by Mao to fight and kill innocent people, for him to regain power and dominance. The main consequences were social as the people of China were left distraught and scarred for life. Furthermore Mao was also back to power, this is also a significant consequence as now Mao was free to once again cause further chaos and make the long terms effects of the revolution worse. ...read more.