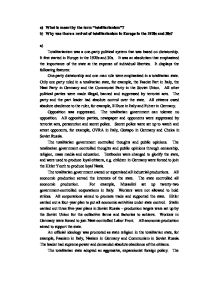 b) Why was there a revival of totalitarianism in Europe in the 1920s and 30s?

a) What is meant by the term "totalitarianism"? b) Why was there a revival of totalitarianism in Europe in the 1920s and 30s? a) Totalitarianism was a one-party political system that was based on dictatorship. It first started in Europe in the 1920s and 30s. It was an absolutism that emphasized the importance of the state at the expense of individual liberties. It displays the following features: One-party dictatorship and one-man rule were emphasized in a totalitarian state. Only one party ruled in a totalitarian state, for example, the Fascist Part in Italy, the Nazi Party in Germany and the Communist Party in the Soviet Union. All other political parties were made illegal, banned and suppressed by terrorist acts. The party and the part leader had absolute control over the state. All citizens owed absolute obedience to the ruler, for example, Il Duce in Italy and Fuhrer in Germany. Opposition was suppressed. The totalitarian government can tolerate no opposition. All opposition parties, newspaper and opponents were suppressed by terrorist acts, persecution and secret police. ...read more.

b) After the First World War, there was a revival of totalitarianism in Europe: Fascism in Italy, Nazism in Germany and Communism in Russia. The revival of totalitarianism was due to post-war economic and social insecurity, post-war political problems, post-war nationalist discontent, post-war decline in religious faith, fear of communism and personal ability of the totalitarian leader. After the First World War, there were many social and economic problems in Europe. In Italy, there was inflation, unemployment and a decline in trade. The First World War had ruined Italian overseas trade and led to economic decline. The demobilization also led to the unemployment of the returned soldiers. The Italians suffered greatly from the First World War. Thus they began to support a strong leader who would promise social and economic security. In Germany, the heavy reparation had led to economic decline. There was serious inflation and unemployment. Unemployment was at its peak after the Great Depression of 1929. Ruhr was occupied by the French troops in 1923 to the miners' strike. Hence the Germans turned to support Hitler who promised economic recovery. ...read more.