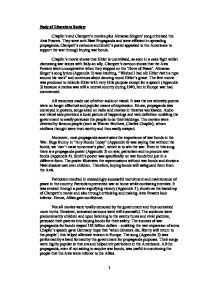 Body of Literature Review Chaplin's and Clampett's movies plus Almanac Singers' song criticised the Axis Powers. They were anti-Nazi Propaganda and were efficient in spreading propaganda. Clampett's cartoons and Smith's poster appealed to the Americans to support the war through buying war bonds. Chaplin's movie shows that Hitler is uncivilized, as seen in a cake fight whilst discussing war issues with Italy-an ally. Clampett's cartoon shows that the Axis Powers were uncooperative when they stepped on the 'Dove of Peace'. Almanac Singer's song lyrics (Appendix 2) was insulting, "Wished I had old Hitler /with a rope around his neck" and continues about dancing round Hitler's grave. ...read more.

Audio and visual aids provided a lucid picture of happenings and task definition enabling the government to easily persuade the people to do their biddings. The movies were directed by famous people (such as Warner Brothers, Charles Chaplin), whom civilians thought were trust-worthy and thus easily swayed. Moreover, most propaganda accentuates the importance of war bonds in the War. Bugs Bunny in "Any Bonds Today" (Appendix 6) was saying that without the bonds, we 'can't make tomorrow's plan', which is to win the war. Even in this song there is a propaganda poster (Appendix 5) on war, patriotism and to procure war bonds (Appendix 4). ...read more.

However, animated cartoons were still successful. The audience were predominantly children and upon listening to the catchy tunes and vivid pictures, persuade their parents into buying bonds for their safety. The success of war propaganda for bonds reaped 185 billion dollars - enabling the vast expansion of arms. Chaplin's speech gave Germany hope that 'when dictators die, liberty will return to the people'; this helped alleviate tension in Europe. The song (Appendix 2) was performed by a band formed by the government for propaganda purposes. Their songs were highly popular at that era and helped stir patriotism in the Americans. All the propaganda, even if not asking to acquire war bonds, was useful in convincing the people that the Axis were inferior to the Allies. 1 ...read more.