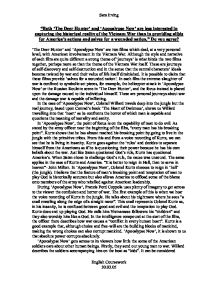 &quot;Both 'The Deer Hunter' and 'Apocalypse Now' are less interested in capturing the historical reality of the Vietnam War than in providing alibis for America's actions and salves for a wounded nation.&quot; Do you agree?

"Both 'The Deer Hunter' and 'Apocalypse Now' are less interested in capturing the historical reality of the Vietnam War than in providing alibis for America's actions and salves for a wounded nation." Do you agree? 'The Deer Hunter' and 'Apocalypse Now' are two films which deal, at a very personal level, with American involvement in the Vietnam War. Although the style and narrative of each film are quite different a strong theme of 'journeys' is what binds the two films together, perhaps more so than the theme of the Vietnam War itself. These are journeys of self-discovery and self-destruction and in the sense that the central characters' ideals become twisted by war and their value of life itself diminished. It is possible to claim that these films provide 'salves for a wounded nation'. In each film the extreme slaughter of war is confined to symbolic set pieces, for example, the helicopter attack in 'Apocalypse Now' or the Russian Roulette scene in 'The Deer Hunter', and the focus instead is placed upon the damage caused to the individual himself. These are personal journeys about war and the damage war is capable of inflicting. In the case of 'Apocalypse Now', Colonel Willard travels deep into the jungle but the real journey, based upon Conrad's book 'The Heart of Darkness', shows us ...read more.

Another incident that happens during 'Apocalypse Now' shows the viewer that the Americans have no mercy in comparison to the Vietnamese. When Willard's boat is ambushed, the Vietnamese fire burning sticks in their direction but one of the crew notices that they are blunt and therefore, not meant to kill the Americans but, only to warn them away. On the other hand, the Americans go into the war with a mind only to kill and devastate. There is one scene in particular in 'Apocalypse Now' which shows us what Francis Ford Coppola thought about America's covering up of the true events of the war. When the soldiers are in battle, there are camera men filming the events but directing the soldiers at the same time. Back home, the aim would be to make them look heroic and noble. It would appear, from that, that the war was all going to plan but, in fact, the Americans were deliberately covering up the truth about all the deaths and the trauma of the men fighting - mentally and physically. The truth was that the Americans outnumbered the Vietnamese massively in both men and in fire-power but were still struggling. As a result, they are lying to cover this up. ...read more.

I believe this is because he has seen the capability of man to do evil and it has shocked him. However, animals are innocent and cannot do evil so he cannot bring himself to kill something that has done no wrong. In 'The Deer Hunter', Russian Roulette is a recurring theme. It shows us how fragile and breakable life actual is. It is clear that Michael does not dread getting shot. He sees it as an excuse to instantly save him from his post-war life in which he feel dejected and outcast. He wants to be put out of his misery and knows that, should he continue to play, his death is inevitable. Another similarity to 'Apocalypse Now' is that, by the closing stages of the book, Kurtz and Michael are both already dead on the inside. They both appear emotionless and detached from the rest of the world. Overall, it is my opinion that both 'Apocalypse Now' and 'The Deer Hunter' are, to a large extent, interested in capturing the historical reality of the Vietnamese War. They are both illustrating to us the affect war has at an individual level. As all the commotion of war is captured on a personal level, however, it is hard to assume that the films were seeking to provide alibis on behalf of America. Sam Irving English Coursework 30.03.05 ...read more.