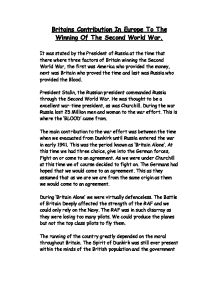 Britains Contribution In Europe To The Winning Of The Second World War. It was stated by the President of Russia at the time that there where three factors of Britain winning the Second World War, the first was America who provided the money, next was Britain who proved the time and last was Russia who provided the Blood. President Stalin, the Russian president commanded Russia through the Second World War. He was thought to be a excellent war-time president, as was Churchill. During the war Russia lost 25 Million men and woman to the war effort. This is where the 'BLOOD' came from. The main contribution to the war effort was between the time when we evacuated from Dunkirk until Russia entered the war in early 1941. ...read more.

During 'Britain Alone' we were virtually defenceless. The Battle of Britain Deeply affected the strength of the RAF and we could only rely on the Navy. The RAF was in such disarray as they were losing too many pilots. We could produce the planes but not the top class pilots to fly them. The running of the country greatly depended on the moral throughout Britain. The Spirit of Dunkirk was still ever present within the minds of the British population and the government was not going to let them forget it. The even increased moral by clever propaganda. The performed this via Radio, newspapers and billboards. The propaganda ranged from keeping the Refugees with their placements to encouraging people to keep their conversations about the war concealed and private. ...read more.

Without this D-Day would not of been able to happen, especially onto the Normandy beaches. Another reason that the link was vital for the war effort, especially Britain, was the supply of food and raw materials into Britain. Without the constant inflows of food we would of lost the war or at least we would have been forced to surrender. This is why the Battle of the Atlantic and the efforts made by the Royal Navy towards keeping the inflow of raw materials and food into Britain was a big contribution to the war effort. All in all I believe that we did contribute greatly to the war effort and that our main asset in this was the time we made for the preparation of weapons, the entrance of Russia into the war and the preparation for America to enter the war. ...read more.