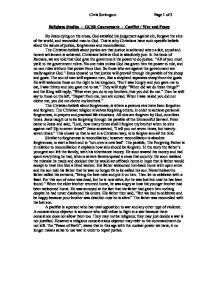 By Jesus dying on the cross, God satisfied his judgement against sin, forgave the sins of the world, and reconciled man to God. This is why Christians have such specific beliefs about the issues of justice, forgiveness and reconciliation.

Religious Studies - GCSE Coursework - Conflict / War and Peace By Jesus dying on the cross, God satisfied his judgement against sin, forgave the sins of the world, and reconciled man to God. This is why Christians have such specific beliefs about the issues of justice, forgiveness and reconciliation. The Christian beliefs about justice are that justice is achieved when a fair, equal and honest settlement is achieved. Christians believe God is absolutely just. In the book of Romans, we are told that God give the government the power to do justice. "All of you must yield to the government rulers. No one rules unless God has given him the power to rule, and no one rules without that power from God. So those who are against the government are really against God." Jesus showed us that justice will prevail through his parable of the sheep and goats. The son of man will separate men, like a shepherd separates sheep from the goats. He will welcome those on the right to his kingdom, "For I was hungry and you gave me to eat, I was thirsty and you gave me to eat." They will reply "When did we do these things?" and the King will reply, "What ever you do to my brothers, that you did for me." Then he will say to those on the left, "Depart from me, you are cursed. ...read more.

The nations will say that weapon inspectors were sent in however they were not given enough time to fully investigate, and also they did not find any weapons. The war was not fully undertaken by lawful authority, as Tony Blair did not have backing from the United Nation. In the parable of the Sheep and Goats we discover that we are judged by our actions. Being born into a Christian family does not automatically allow eternal life; this must be earned through our time on earth. In this parable the condemned did nothing wrong as such, but by ignoring Christ in other humans beings; they turned their backs on Jesus. This is what America has done by not being reconciled with its enemies. For the past 30 years there has been on-going conflict in Northern Ireland, and the lives that have been taken during this have done little to change the situation. Both parties think they are not receiving justice, therefore they have lost faith in peace and the violence has escalated. On 15th August 1998, a bomb was detonated in Omagh, Northern Ireland. This was a result of the conflict and concluded with 29 deaths and hundreds of injuries, it was known as the Omagh Bomb. Various attempts had been made to reconcile the two communities; the most recent was the Good Friday Agreement, however still both sides thought they were not at justice and the agreement has fallen away. ...read more.

Also, many people row that the use of nuclear weapons ended the Second World War and prohibited the invasion of mainland Japan and saved many American troops from death. It has been said that powerful countries such as Britain and America have avoided major wars because of their immense nuclear power. I see conventional war as an accepted part of history, the present world and no doubt of the future. Throughout our time on earth and the future, people will always try to stray from what other people accept to be correct, and by doing this they will not be showing love to their neighbours. Conventional war will always be used to set these people back to there place, as long as this war is justified. It is an integral part of life as we, Christians know it and personally I do not think it will change. Overall, I see the use of nuclear warheads a waste of time and money. If all the nations disarmed, then others would no doubt follow suit, however I do not ever think that all countries will disarm therefore other countries will begin to spend money on nuclear warheads yet again. As a result of nuclear war, I do not think there will be a winner just a planet of losers who will destroy God's planet. As a Christian I do not see the use of nuclear war acceptable. Chris Scrimgour Page 1 of 3 ...read more.