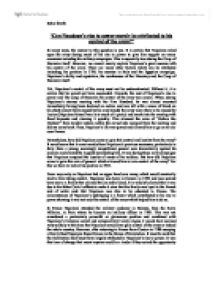 Can Napoleon's rise to power merely be attributed to his control of the government?'

'Can Napoleon's rise to power merely be attributed to his control of the army?' In many ways, the answer to this question is yes. It is certain that Napoleon relied upon the army during much of his rise to power to give him support on many occasions including his military campaigns. This is especially true during the Coup of Brumaire itself. However, we cannot merely explain Napoleon's great success with his control of the army. There are many other factors which can be attributed including; his position in 1795, his success in Italy and the Egyptian campaign, Napoleon's ability and reputation, the weaknesses of the Directory and the Coup of Brumaire itself. Yet, Napoleon's control of the army must not be underestimated. Without it, it is certain that he would not have succeeded. Towards, the end of Napoleon's rise to power and The Coup of Brumaire his control of the army was crucial. When, during Napoleon's stormy meeting with the Five Hundred, he was almost executed immediately having been declared an outlaw and was left with a smear of blood on his cheek (most likely caused by his own hands) the army were there to be roused by Lucien (Napoleon himself was in to much of a panic) and march into the meeting with fixed bayonets and clearing it quickly. This silenced the cries of 'Outlaw the Dictator!' from trouble makers within the crowd who escaped from the meeting and did not come back. ...read more.

There are many other factors which enabled Napoleon to rise to power rather than just his control of the army. Napoleon showed his ability to be a diplomat with the Treaty of Campo Formio and it gave him a taste of political leadership and experience that none of his military rivals shared. This experience would help him rise to power. The Legend of Napoleon also began to spread around France in carefully crafted reports for newspapers distributed around France especially with tales of his victories in Lodi, Arcola and Rivoli. Napoleon was beginning to seize control of the people as well as the army, and without the people's support, not merely his control of the army, Napoleon would have been unable to rise to power. At the close of this successful campaign Napoleon had more control than ever. He appeared to be the most successful of young generals as his main rival died not long after the Fructidor coup. This meant he was appointed to command an invasion of England. However Napoleon chose to invade Egypt instead which turned out to be, despite all the romance it provided for Napoleonic legend and intellectual progress, such as the Rosetta stone, a military failure. Thankfully for Napoleon this was not known in France until long after his return which meant his rise to power was not hindered in any way. The fact his humiliating defeat was concealed meant he could continue his rise to power, an aspect other than his control of the army that would help him to do so. ...read more.

It is clear here that Napoleon's control of the army attributed to his rise to power and possibly even saved his life. The role of Lucien, Napoleon's brother, is seen to be very useful here at the Coup. It was he who roused the troops to clear the Five Hundred as Napoleon was too frightened after coming 'so close to death'. He reassured the troops of Napoleon's good intentions and acted as a counter balance to the Jacobin majority when calming the members of the Five Hundred inside. He could be seen as the real hero here and was certainly invaluable as he saved Napoleon from becoming an outlaw. He is another factor, which did not involve Napoleon's control of the army, which contributed to Napoleon's rise to power. The Ancients heard about what had occurred and abolished the Directory, meaning the Law of Brumaire could be created, leaving Napoleon as one of the three provisional consuls and in the perfect position to gain complete control of all of France and complete political power. Thus, we can see that a large number of factors attributed to Napoleon's rise to power, not merely his control of the army. Yet, I still feel that without his control over the army, he would have been unlikely to seize power successfully, as although there were many other factors, many linked in a direct or indirect way to Napoleon's military influence and power. Therefore I still feel that Napoleon's control of the army is the most important factor of all in relation to Napoleon's rise to power. ?? ?? ?? ?? Isobel Smith ...read more.