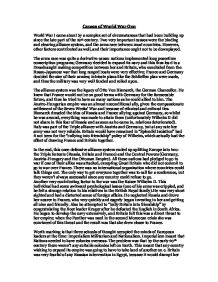 Causes of World War One

Causes of World War One World War I came about by a complex set of circumstances that had been building up since the late part of the 19th century. Two very important causes were the binding and cleaving alliance system, and the arms race between most countries. However, other factors contributed as well, and their importance ought not to be downplayed. The arms race was quite a derivative cause: nations implemented long peacetime conscription programs; Germany decided to expand its navy and this thus lead to a Dreadnaught making competition between her and Britain, who concluded from the Russo-Japanese war that long ranged boats were very effective; France and Germany doubled the size of their armies; intricate plans like the Schlieffen plan were made, and thus the military was very well funded and relied upon. The alliance system was the legacy of Otto Von Bismarck, the German Chancellor. He knew that France would not be on good terms with Germany for the foreseeable future, and thus he tried to have as many nations as he could allied to him. ...read more.

The only way to get everyone together was to call for a conference, but they weren't always successful since any country could refuse to go. Another very contributing factor to the war was the Kaiser Wilhelm II. This individual had some awkward psychological issues (one of his arms was crippled, and he felt a strange relation to his relatives in the British Royal family).He was very short sighted and had a distorted sense of foreign affairs. He neglected Russia and drove her nearer to France, who very quickly and eagerly began investing in her and getting all nice and friendly. Also he attempted to "bully Britain into friendship" by congratulating the Boer leader Kruger after he defeated the English in South Africa. He began to develop the navy extensively, and Britain felt this was a direct threat to her empire; when the Panther was used in the second Moroccan crisis she was convinced of this threat and the result was that she drew closer to France. Worth marking is that three schools of thought occupied the minds of European leaders at the time: Imperialism Militarism and Nationalism. ...read more.

From Bismarck's era the German people had become very nationalistic themselves, and the influence of the military in the government mixed dangerously with that. Militarism was the belief that conflicts should be resolved by belligerent ways. It also meant that the army had a lot of influence in a country's government. Joffre in France and Hindenburg in Germany are two such examples of militaristic influential leaders. The last two wars in Europe had been relatively short (from seven weeks to less than six months) and they had not been very violent. People had forgotten how painful wars could be and after a couple of decades of rough relations and crises, there was a general idea that war was just inevitable and they might just as well have it all over and done with. This was reinforced by the huge amounts of money countries were spending in weaponry; if these patterns continued they would only lead to either bankruptcy or war. Thus, Although the Arms race and the alliance system played an important role as triggers of the Great War, they were really not the only ones and not the most important. ...read more.