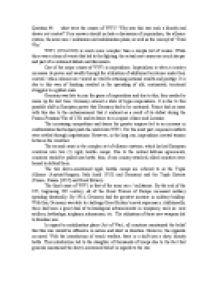 Causes of WWI and the roles of Women before WW1

ï»¿Question #1 ï what were the causes of WW1? Why was this war such a bloody and drawn out contest? Your answer should include a discussion of imperialism, the alliance system, the arms race / militarism and mobilization plans, as well as the concept of ‘Total War’. WW1 (1914-1918) is much more complex than a simple list of causes. While there was a chain of events that led to the fighting, the actual root causes are much deeper and part of a continued debate and discussion. One of the major causes of WW1 is imperialism. Imperialism is when a country increases its power and wealth through the utilization of additional territories under their control / when colonies are viewed as vital for attaining national wealth and prestige. It is due to this way of thinking resulted in the spreading of old, continental, territorial struggles to a global scale. Germany was late to join the game of imperialism and due to this, they needed to make up for lost time. Germany entered a state of hyper-imperialism. It is due to this possible shift in European power that Germany had to be contained. ...read more.

As a consequence, there was a restriction on human rights as well as on the freedom of industries. However, governments attempted to justify these actions by asserting that this war was unlike any other seen before, it was industrial-based and global in scale. This is one meaning behind the words ‘Total War’. The other is the removal of able men from the work force so as to send them to the battlefronts. In addition, some countries employed: rationing, government run propaganda, etc. ________________ Question #4 ï outline the traditional perceptions and roles of women before WW1. How did the necessities of war change their roles in society? In the end, did women’s place in society really change after the soldiers returned home? For a time that seems to span ‘forever’, women have been deemed the lesser important / weaker sex. When reflecting back on Medieval times, it is plain to see that when it came to women and their rights –or rather lack there of- not much has changed. Although the categorization of women as either saint (virgin) or sinner (whore) was not as present, little to no advancements in regards to their rights were seen. ...read more.

However, when the men returned from their service, despite the acquired taste of equality, women were pushed back into the homes. This can be seen with the Persons Case wherein British female subjects were permitted to vote provincially but were barred from joining the Senate. This is due to the fact that women were only considered ?persons? on regards to pains and penalties, not rights as well as privileges such as being part of the Senate. However, on October 18th 1929, the Supreme Court of Canada declared that under section 24 of the BNA, women were indeed ?persons?. It is important to note that although the road had been paved for political equality for women, it took a long time for equal voting rights to be established and is still a battle. A few examples of countries that would later extend the right to vote to women is: New Zealand who in 1893, became the first nation to extend the right to vote to all adult women, France in 1944, Germany in 1918, etc. Looking solely at WW1, it may not appear that there were long lasting advancements in women?s rights. However, when referring to the combination of the Industrial Revolution and WW1, it is plain to see that the era laid the groundwork permitting future generations to keep up the fight towards complete equality. ...read more.