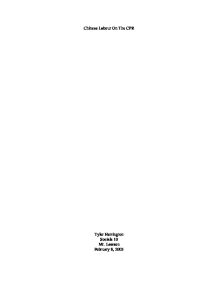 Chinese Labour On The CPR.

Chinese Labour On The CPR Tyler Herrington Socials 10 Mr. Lawson February 8, 2003 Although the majority of British Columbians were of Caucasian descent in the late nineteenth century, it was not the white people who built the railroad; it was the Chinese who carried most of the burden through much sweat and toil. In the 1880's Chinese labourers were brought over from China, promised good pay, one hundred grams of food per day, clean drinking water and safe working environments. To the Chinese, this sounded like a wonderful new life, a much better one than they had in China. It was too good to be true though. Thousands of Chinese labourers were disappointed beginning from their first day on the voyage from China to Canada to work on the Canadian Pacific Railroad, right through to its completion. Four hundred grams of food were originally promised to feed four labourers per day, but the reality was that the Chinese labourers had to share the four hundred grams of food between ten people. As well, the Chinese were only given two cups of water each day. It is very difficult to survive, while performing strenuous labour, with this level of sustenance. ...read more.

Little did they know their plight would only get worse. (Ningyu-Li pg.20-30) After months cramped in boats, with little food and water, the workers were forced to hike to Lytton, British Columbia, climbing numerous mountains using only shoulder poles to carry all their equipment, food and clothing. All the labourers had was one rope between them, to be used as a safety measure while hiking up the steep terrain into Lytton. These labourers started work in the middle of winter, atop frigid mountains, with little protection from the cold. They only had simple tools like hand drills and shovels, and were expected to do all the strenuous labour while the white men supervised. Many of the Chinese were born in warm, southern China, and were never used to cold mountain weather. The Chinese had no jackets, just the light clothing they had brought from China. Numerous Chinese became very ill from the cold mountain winters and hundreds died. (Ningyu Li pg. 35-40) The first twenty-seven kilometres of railroad track were very difficult to build. The Chinese labourers were instructed to construct seventeen tunnels and over six hundred bridges. On top of all the difficult work, there were no safety measures. When the Chinese carried the dangerous nitro-glycerine on their heads, or in pushcarts, all there was cushioning any movement of the explosives was one bundle of straw. ...read more.

Onderdonk made three million dollars profit and the Chinese "Would have to pass through another hells gate in their lives". Before the Chinese were allowed to return home, they would have to pay the money for their original trip over, and then would have to pay for their long, gruelling trip back to China. Few Chinese ever saw their families again because they were too poor to afford the voyage back home. Racial discrimination drove the Chinese into Chinatowns, which were isolated from areas where Caucasians lived. The Chinese were forbidden to live anywhere outside of the Chinatowns. (Ningyu Li pg. 60-63) Clearly, the Chinese labourers were deceived by Onderdonk and his original contracts to work on the CPR. The facts they were given about job opportunities were a lie. The amount of food supposed to feed four people was actually stretched to feed ten. In addition, the Chinese were paid half of what the white foreman were. A lot of the white foreman did not have any more experience than the Chinese labourers did in building railroads. The Chinese had to pay for the tools they used, the little food they got, and their living quarters; but the white men were given all of this. The Chinese labourers, who worked on the Canadian Pacific Railroad (CPR), were misled and maltreated. ...read more.