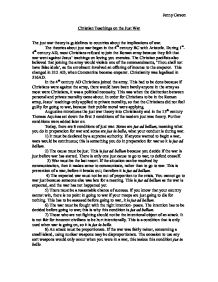 Christian Teachings on the Just War

Christian Teachings on the Just War The just war theory is guidelines to countries about the implications of war. The theories about just war began in the 4th century BC with Aristotle. During 1st-4th century AD, most Christians refused to join the Roman army because they felt that war went against Jesus' teachings on loving you enemies. The Christian pacifists also believed that joining the army would violate one of the commandments, 'Thou shall not have false idols', as the enrolment involved an offering of incense to the emperor. This changed in 312 AD, when Constantine became emperor. Christianity was legalised in 316AD. In the 4th century AD Christians joined the army. This had to be done because if Christians were against the army, there would have been barely anyone in the army as most were Christians, it was a political necessity. This was when the distinction between personal and private morality came about. In order for Christians to be in the Roman army, Jesus' teachings only applied to private morality, so that the Christians did not feel guilty for going to war, because their public moral were applying. Augustine introduces the just war theory into Christianity and in the 13th century Thomas Aquinas set down the first 3 conditions of the modern just was theory. ...read more.

This is a condition that is only used when war is going on, so it is jus in bello. 8) An attack must be proportionate. If the war was fairly minor, concerning a small island, using nuclear weapons may be disproportionate. The occasion to use any sort weapons would only occur when you were in a war, this makes this condition jus in bello. The just war theory differs to pacifism because the just war theory is actually realistic in the way that it is set out, there are bound to be wars, and the just war theory helps to justify these wars. In an age of weapons of mass destruction, the just war theory is an important deterrent to ensure that proportionate action is taken during war. It is important to have some rules for war than none at all because guidelines such as the just war theory make war more humane and can set the foundation for international law, like the Geneva Convention. The rules also have a psychological benefit as well; one side will want to keep to the rules so that the other side do as well. To prove that the just war condition works there would have to be wars that would have been just, like the Falklands war, this shows us that it can work in practice. ...read more.

The just war theory fits in with Christian ideas. P. Ramsey says that Jesus' teachings on enemies and revenge only refer to a private individual and Christians have a duty to defend innocent victims. In Romans 13, there is submission to the authorities as they represent God. The authorities 'bear the sword' and so have the right to use violence. Jesus uses force to clear the temple in Mark 11, but this is for a good cause, therefore it is just. 'Blessed are the peacemakers' (Matthew 5.9) this is saying that war may be necessary for a just peace. R. Harries, a Christian thinker thought that nuclear weapons are part of the just war tradition, and used to control the situation. He also thought that we should be prepared to carry out our threat, (a deterrent) but we don't want to use the nuclear weapons because they cause too much damage. G.E.M Anscomb believed that deaths are still deaths, even if the aim is for something good, you can't justify a mean by its end. A. Kenny backs her up and thinks that you can't pretend that you are not responsible for killing civilians just because you didn't mean to. In the book of Revelations, nuclear war is 'predicted' and A. Chester thinks countries who use nuclear weapons believe that they are 'fulfilling God's will.' Jenny Carson ...read more.