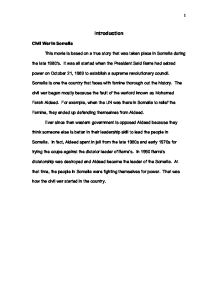 Introduction Civil War in Somalia This movie is based on a true story that was taken place in Somalia during the late 1980's. It was all started when the President Said Barre had seized power on October 21, 1969 to establish a supreme revolutionary council. Somalia is one the country that faces with famine thorough out the history. The civil war began mostly because the fault of the warlord known as Mohamed Farah Aideed. For example, when the UN was there in Somalia to relief the Famine, they ended up defending themselves from Aideed. Ever since then western government is opposed Aideed because they think someone else is better in their leadership skill to lead the people in Somalia. In fact, Aideed spent in jail from the late 1960s and early 1970s for trying the coupe against the dictator leader of Barre's. In 1990 Barre's dictatorship was destroyed and Aideed became the leader of the Somalia. At that time, the people in Somalia were fighting themselves for power. That was how the civil war started in the country. Ethical Point of View Freedom In this movie there are so many ethical problems involved. By watching this movie, it made realize that freedoms are never free. ...read more.

This is obvious, the sergeant was given an authority to lead and make decision. Even though he seems to have less experienced than the rest of the soldier, he was able to stand in front of them and order them as needed. In this kind of situation, it doesn't matter how young you are compare to the rest of your group, as long as you are given the institutional authority in your hand, you have the right to make decision and order the rest of your group. Thorough out the whole movie, the sergeant was ordering his people as needed. He was well focus and able to lead his fellow soldiers. One of his main focus also included, to bring his rangers(fellow soldiers) back to the station. Professionalism and Loyalty According to the movie, we can see loyalty was taken place in both side. When dealing with Loyalty, there are no right or wrong. In every organization, people usually show their loyalty to their leaders. For example, Aideed follower were probably aware that there were doing something against the government but they were still loyal to Aideed and most of them ended giving up their life for him. ...read more.

Some went there with full of fears, some went with full of courage and positive attitude. No matter what was in their mind, they all went there to fight for freedom. Conclusion By watching this movie, I learned that whatever we do today is the result of our future. So in order to have a good future, it is important to spend our time wisely while we have time. Since we all know freedom are never free, we should not misused our freedom. Misusing our freedom may bring us some disadvantage in our life. A lot of young people are misusing their freedom today. Some of them ended up spending the rest of their life in jail and some ended up bringing harmful stuff to their surrounding. In my opinion, the United States should not go in other country and fight. I don't think they should be policing other country. As long as the country done no harmful stuff to their neighbor country, I don't think there is a need for United States to involve in every politic crisis in other country. We may think we are right but it may be wrong to them. Since we are just human being, we all have different opinion and different life style. Your yes could be no for other people and verse versa. 3 1 ...read more.