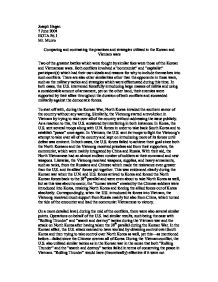 Joseph Hagan 7 June 2004 HOTA Pd.1 Mr. Munro Comparing and contrasting the practices and strategies utilized in the Korean and Vietnam wars Two of the greatest battles which were fought by similar foes were those of the Korean and Vietnamese wars. Both conflicts involved a "communist" and "capitalist" participant(s) which had their own ideals and reasons for why to include themselves into such conflicts. There are also other similarities other than the opponents in these wars, such as the military tactics and strategies which were effectuated during this time. In both cases, the U.S. intervened forcefully introducing large masses of militia and using a considerable amount of armament, yet on the other hand, their enemies were supported by their allies throughout the duration of both conflicts and succeeded militarily against the democratic forces. To start off with, during the Korean War, North Korea invaded the southern sector of the country without any warning. Similarly, the Vietcong started a revolution in Vietnam by trying to take over all of the country without addressing the issue publicly. ...read more.

had similar results, such being the case with "Rolling Thunder" and "search and destroy" tactics during the Vietnam war and the attack on North Korea after having taken the 38th parallel during the Korean War. In the Korean affair, the U.S. attack seemed to have worked by obtaining control over South Korea and then trying to take control over North Korea as well, yet this-as mentioned before-failed since the Chinese overran all of Korea. During the Vietnam conflict, the U.S. also utilized similar tactics as in the Korean war in the sense that both "Rolling Thunder" and the "search and destroy" tactics failed in terms of conserving the peace in Vietnam. "Rolling Thunder" would have (theoretically) effective if it were not interrupted and "search and destroy" tactics would have also been effectual if the western troops would have not left the territories which they obtained after every attack. As Ambassador Maxwell Taylor mentioned in 1964, "The ability of the Viet Cong continuously to rebuild their units was one of the mysteries of this guerrilla war," referring to the fact that the Vietcong would simply regroup after an American attack and reestablish a military outpost in the sector which was wiped out-since the western forces would simply leave after having attacked. ...read more.

hand, the Vietnamese were even harder to localize, since they could easily camouflage themselves (everyone's clothing was similar, there were absolutely no differences). This is why the western troops had to take chances while eliminating civilians which might have been Vietcong. But in terms of policies and tactics on that level, the Vietnamese also differed from the Koreans in the sense that most of the South Vietnamese utilized "strategic hamlet" in order to round up people who might be opposers to the regime. By doing this, any uprisings were stopped and effectively neutralized. Both the Korean and the Vietnamese wars had several things in common in terms of the practices and strategies used during these conflicts as well as some aspects which were distinct. The two communist foes in the wars developed guerrilla type warfare and utilized it in a very effective matter against their enemy which lead to even more pressure from both sides of the conflict. Both L.B. Johnson and Nixon said "I'm not going to be the first President to lose a war," showing an example of the extreme opposition which the Americans encountered in the Asian wars. ...read more.