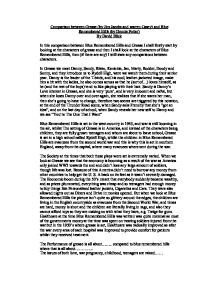 Comparison between Grease (by Jim Jacobs and warren Casey) and Blue Remembered Hills (by Dennis Potter).

Comparison between Grease (by Jim Jacobs and warren Casey) and Blue Remembered Hills (by Dennis Potter) By David Blick In this comparison between Blue Remembered Hills and Grease I shall firstly start by looking at the characters of grease and then I shall look at the characters of Blue Remembered Hills, then (if there are any) I will state any comparisons between characters. In Grease we meet Danny, Sandy, Rizzo, Kenickie, Jan, Marty, Rodder, Doody and Sonny, and they introduce us to Rydell High, were we watch them during their senior year. Danny is the leader of the T-birds, and his cool, leather-jacketed image, make him a hit with the ladies, he also comes across as that he (sort of...) ...read more.

Grease is set in a high school called Rydell High, whilst the children in Blue Remembered Hills are evacuees from the second world war and this is why this is set in southern England, away from the capital, where many evacuees where sent during the war. The Society at the times that both these plays were set is extremely varied. When we look at Grease we see that the economy is booming as a result of the war as America only joined WW2 towards the end and didn't lose any large amount of soldiers, though life was lost. Because of this America didn't need to borrow any money from other countries to help get the U. S. ...read more.

in the 1950's where grease is set, Healthcare was radically improved as after the war every area of each hospital was Improved to provide comfort for patients whilst they received treatment. The Performance of grease is all about........ compared to blue remembered hills where that is all about.............. The issues of both love, war pregnancy, childhood, teenagers are raised...... Grease is a musical performance, it could be seen as a sort of comedy as the teens in Grease tend to lark about a bit, this is a complete transformation when we look at blue remembered hills where that is set in the time of the second world war, and the characters aren't teenagers....their children. Also that the type of script is varied as Grease was written originally for the stage, blue remembered hills was written for television. ...read more.