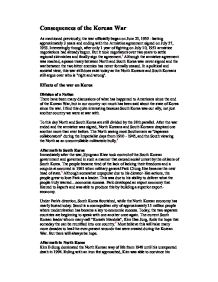 Consequences of the Korean War.

Consequences of the Korean War As mentioned previously, the war officially began on June 25, 1950 - lasting approximately 3 years and ending with the Armistice agreement signed on July 27, 1953. Interestingly though, after only 1 year of fighting on July 10, 1951 armistice negotiations had already begun. But it took negotiators over two years to settle regional skirmishes and finally sign the agreement.3 Although the armistice agreement was reached, a peace treaty between North and South Korea was never signed and the war between the two bitter enemies has never formally ceased. In a political and societal view, this war still does exist today as the North Koreans and South Koreans still argue over who is "right and wrong". Effects of the war on Korea Division of a Nation There have been many discussions of what has happened to Americans since the end of the Korean War, but in our country not much has been said about the state of Korea since the war. I find this quite interesting because South Korea was our ally, not just another country we were at war with. ...read more.

"hermit kingdom" they were, but rather a revolutionary leader in the world.8 He was able to do this through an ideology close to the Korean heritage called Juche. Juche is a sort of Korean communism of its own that pervaded all classes of society and was very widespread throughout the nation. Instead of developing a successful economic strategy as South Korea did, North Korea focused on its military by developing the power to create Nuclear weapons. This did get North Korea recognized, but not in the fashion that they had wished for. Today Kim Il Sung's son lead's North Korea in a similar manner as his father did before him. The country has been hit hard by famine and is basically in tatters. No one knows its next steps, but drastic measures will have to be made in order to bring back this country on the brink of disaster. Effects of the war on the United States The Forgotten War Many historians consider the Korean War the "Forgotten War" or the "Unknown War" because it was extremely unpopular not only by ordinary citizens, but also most soldiers fighting in the war themselves. Some also touted it to be the first major U.S. ...read more.

Because Truman labeled this full-out war a "police action" instead of what it was, future presidents would send troops all over the world for many reasons without congresses' approval, using the Korean War as a precedent as their justification. Vietnam, Kosovo, Bosnia, a number of mini-wars and even the Gulf War are some examples, just to name a few. Today many regard the United States as the world's police officer because our country is constantly fighting these U.N. peacekeeping missions. The Korean War proved to be the trendsetter for what has now become commonplace. Many question the United States responsibility to "police" every country in the world. Conclusion No one ever actually "wins" a war. And ironically, everyone involved in this war claimed to win in one fashion or another. We can all only hope that wars such as this one can be somehow avoided in the future. Presently, the United States is still in a war of words with North Korea as President Bush demonstrated recently by saying the following: "I will remind the world that America will not allow North Korea and other dangerous regimes to threaten freedom with weapons of mass destruction."6 Hopefully someday both the United States and North Korea can come to terms and settle on a peaceful agreement ...read more.