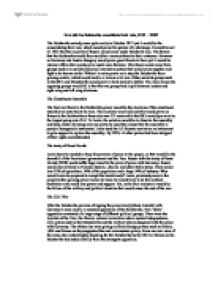 How did the Bolsheviks consolidate their rule, 1918 - 1924? The Bolsheviks seized power quite easily in October 1917 yet it would be the consolidating their rule, which would prove far greater of a challenge. It would be not till 1921 that the majority of Russia would come under Bolshevik rule. The threats that the Bolsheviks would face would be a serious threat to their existence. However as Germany and Austro-Hungary would prove great threats to them yet it would be internal affairs that would prove much more threaten. This threat would come from groups such as Loyalists and social revolution parties that would come together and fight to be known as the 'Whites' to seize power or to stop the Bolsheviks from gaining control, which would lead to a vicious civil war. Other socialist groups such as the SR's and Mensheviks would prove a hard enemy to defeat. ...read more.

Yet, in the final analysis it would be the failure of the military and political situation that would cause the end of the war. The Civil War After the Bolsheviks promise of signing the peace treaty (Brest-Litosvk) with Germany it soon lead to a mounted opposition of the Bolsheviks. This 'white' opposition consisted of a large range of different political groups. There were the loyalists of the Tsar, the liberals, national minorities whom wanted independence, rival parties such as the Mensheviks and the military whom disagreed with the peace with Germany. The whites also were giving aid from foreign powers such as Britain, USA and France as they supported the anti-communism policy. From an over-view of the crisis, this looked highly daunting for the Bolsheviks but by 1921 all threats to the Bolsheviks had ended initially from the strongest opposition. The whites were a divided army separated by the one desire to rid Russia of the Bolshevik regime. ...read more.

The capital was moved from the vulnerable area of Petrograd to Moscow. The economy was geared towards the effort of the war known as War communism. The food that would be needed to supply the army and workers was huge so all food was taking from the peasants which was hugely unpopular. By early 1921, all the white strongholds were defeated and all allies after the treaty of Versailles decided it would be more appropriate to not continue another war. The military strategy was a lot more organised and skilful than that of the whites, giving decisive advantage to the reds. Credit also must go towards Trotsky as his sole leadership of the army meant he could defend the lands well and organised. The support of the reds was also key as for example the workers saw a more guarantee from the reds for gains. The greens or peasants did not like the aspect of the Bolsheviks but saw them as less of a threat than the whites with relation to their land. ...read more.