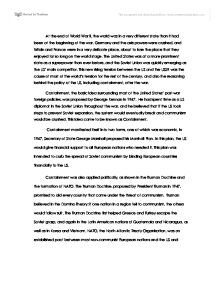 Containment, the basic idea surrounding most of the United States post-war foreign policies, was proposed by George Kennan in 1947.

At the end of World War II, the world was in a very different state than it had been at the beginning of the war. Germany and the axis powers were crushed, and Britain and France were in a very delicate place, about to lose the place that they enjoyed for so long on the world stage. The United States was at a more prominent state as a superpower than ever before, and the Soviet Union was quickly emerging as the US' main competitor. ...read more.

He had spent time as a US diplomat in the Soviet Union throughout the war, and he believed that if the US took steps to prevent Soviet expansion, the system would eventually break and communism would be crushed. This idea came to be known as Containment. Containment manifested itself into two forms, one of which was economic. In 1947, Secretary of State George Marshall proposed his Marshall Plan. In this plan, the US would give financial support to all European nations who needed it. ...read more.

The Truman Doctrine first helped Greece and Turkey escape the Soviet grasp, and again in the Latin American nations of Guatemala and Nicaragua, as well as in Korea and Vietnam. NATO, the North Atlantic Treaty Organization, was an established pact between most non-communist European nations and the US and Canada that provided mutual agreements for protection should one member be attacked. The Marshall Plan, the Truman Doctrine, and NATO were to be at the center of American foreign policy for the next 40 years during the heat of the cold war. They all revolved around the central idea of containment. ?? ?? ?? ?? ...read more.