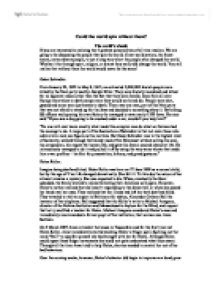 Could the world spin without them?

Could the world spin without them? The world's wheels If you are interested in realizing the 5 greatest personalities of all time read on. We are going to be discussing the people that spin the world. Great world saviors, the finest actors, extraordinary people, to cut a long story short the people who changed the world. Whether it be through sport, religion, or drama they really did change the world. You will realize that without them the world would never be the same! Osker Schindler: From January 30, 1933 to May 8, 1945, an estimated 5,860,000 Jewish people were killed by the Nazi party lead by Adolph Hitler. They were brutally murdered and killed for no apparent reason other than the fact that they were Jewish. Jews from all over Europe were taken to death camps were they would work and die. People were shot, gassed and some were just beaten to death. There was one man, part of the Nazi party that was not afraid to stand up for the Jews and decided to something about it. By bribing SS officers and opening his own factory he managed to save nearly 1200 Jews. ...read more.

He quickly became a legend. As The Times of London later said, "How do you spell Pel�? G-O-D." He has even been known to stop war: both sides in Nigeria's civil war called a 48-hour cease-fire in 1967 so Pel� could play an exhibition match in the capital of Lagos. Abraham Lincoln: Abraham Lincoln was born February 12, 1809 in Kentucky. He was one of three children born to Thomas and Nancy Hanks Lincoln, and was named after his paternal grandfather. Thomas Lincoln was a carpenter and farmer. Abraham's parents were members of a Baptist congregation which separated from another church due to opposition to slavery. When Abraham turned 7, he moved to southern Indiana with his family. Abraham went to school briefly in Kentucky and did so again in Indiana. He attended the schools with his older sister, Sarah (his younger brother, Thomas, died in infancy). In 1818 his mother, Nancy Hanks Lincoln, died from milk sickness, a disease obtained from drinking the milk of cows which grazed on poisonous white snakeroot. His father Thomas Lincoln remarried the next year. Abraham loved his new stepmother, Sarah Bush Johnston Lincoln. ...read more.

His appearance in the latter film brought him to the attention of Francis Ford Coppola who cast him as Michael Corleone in "The Godfather" (1972) now known as one of the greatest films ever! This wasn't a popular choice, as most of the production team wanted Jack Nicholson to play that part. At first he wasn't comfortable and thought he was going to be fired. But he was so good that in fact he was nominated for best supporting actor. He later went on to reprise his role as Corleone in "The Godfather II" (1974). The film won four academy awards. Pacino once again was nominated best actor but lost out to Art Carney. He then took on another vicious gangster role and cemented his legendary status in the ultra-violent Scarface (1983). Making another return to the Corleones, he made the Godfather III (1990). In 1997 he was honored with a star on Hollywood's Walk of Fame. Pacino is one of the greatest emotional athletes of all time, but this hard process has influenced his private life. He has never married, although he lives with actress Beverly D'Angelo, with whom he has two kids. He has had shorter affairs with Penolpe Ann Miller and Diane Keaton. Pacino demands approximately $10 million per picture. ...read more.