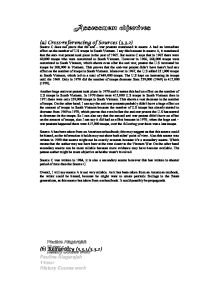 Three-quarter of all napalm victims in Vietnam were burned through to the muscle and bone. The pain alone often caused death because it was so intensive. Agent orange contained traces of the most toxic forms of dioxin. Hectares of forests were destroyed using Agent Orange. Not only did Agent Orange destroy thousands of trees but it was later found to have caused birth deformities in children. It also caused cancers in soldiers fighting in the war. Source H is a picture, which shows children hit by napalm. This suggests that the troops didn't just deform the Viet Cong; they deformed innocent people and children. Therefore these Vietnamese who were supporting for the U.S, would now turn against U.S, as the U.S punished people who didn't even do anything wrong. However the pictures are always not true as they can be tampered with. Source I says American civilians were sickened of the fact that their own country used chemicals such as napalm and Agent Orange, there fore they were showing disgust towards their own country. The source also says, these chemicals affected the soldier and the civilians in the same way. This source is taken from a schoolbook; therefore it might be reliable, as the publisher may wants the children to learn the facts. However, on the other hand might not be reliable. It may be written by someone who doesn't want American children to know how badly the U.S acted towards the Vietnamese. It could be a government publication and therefore unreliable it so also it is a secondary source. Source J is two pictures with writing. It shows two photographs, first picture was taken before the land was destroyed by agent orange and the second picture was taken after the agent orange had been bombed over the land. The first picture shows land full of crops and the second picture shows all those crops have been destroyed; even the land looks so rocky. ...read more.

900,000 North Vietnamese and Viet Cong died, 400,000 North Vietnamese died, only 50,000 American troops died. From this you can see the U.S although they had a lot of power and killed lot of Vietnamese soldiers, the Vietnamese would not give up easily. Even with this massive number of human loss the Vietnamese able to win the war. All these sources are biased as most of them from American textbooks. Also most sources seem to be secondary source. Therefore they consider not being reliable. Overall I would say all these sources doesn't give me enough evidence to understand why a super power like the united States of America failed to defeat the Viet Cong. These sources are only taken from textbooks. I would likely to have more evidence such as:- * film footage e.g. damaging crops and civilian using bombs, * record tapes e.g. enquiries, * books e.g. about war, * past news papers e.g. pictures, articles, * interviews with eye witness I believe doing more research would provide more information rather than what the source's tells us. Guerrilla tactics was a popular tactic used by the Vietcong. These were hard among the U.S troops. This was a very important factor for why the U.S didn't win the war. None of these sources doesn't give any information about these Guerrilla tactics such as jungle tactic, booby traps, trip-wire, etc. The U.S soldiers didn't fight very affectively, because they began to be scared for their lives. Thus so many soldiers begin to leave their jobs and later in 60's American people stayed back to join as soldiers. But the Vietnamese were strong, they had many people to fight even the women begun to fight for their land. This was another factor why America couldn't win the war The above two factors (guerrilla tactics and the weakness of the soldiers) isn't mentioned in any source at all. I think I need more information on these. Over all I would say all these source don't give me enough information. Pauline Alagarajah 11mur History Course work ...read more.