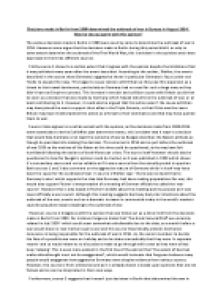 Decisions made in Berlin from 1900 determined the outbreak of war in Europe in August 1914. Do you agree?

﻿?Decisions made in Berlin from 1900 determined the outbreak of war in Europe in August 1914.? How far do you agree with this opinion? The various decisions made in Berlin in 1900 were seen by some to determine the outbreak of war in 1914. However some argue that the decisions made in Berlin during this period didn?t or only to some extent determine the outbreak of the First World War; this is evident in the opinions and views expressed in the three different sources. Firstly source 1 shows to a certain extent that it agrees with the opinion despite the limitations that it was published many years after the event described. According to the author, Wehler, the events described in the source show Germany?s aggressive intent in particular Germany?s focus under von Tirpitz to expand the navy. This began to cause tension with Britain as they saw this expansion as a threat to their naval dominance, particularly as Germany had no need for such a large navy as they didn?t have an Empire to protect. ...read more.

In source 1 Wehler says ? there was no doubt that to Germany?s aims? which supports the idea that Germany had been making preparations for war, this would also support Fischer?s interpretation of a meeting of German officials he called the ?war council?. However this is only based in Fischer?s beliefs about the meeting and its purpose as it was never officially a war council. Although this meeting suggests Germany had prior intentions about the outbreak of the war, events such as a dramatic increase in commercial rivalry in the world?s markets could be plausible reasons leading to the outbreak of war. However, source 2 disagrees with the opinion that war broke out as a direct link from the decisions made in Berlin from 1900. For instance Ferguson states that "the Great General Staff we uncannily relaxed in July 1914" which could seem somewhat unbelievable due to the date, as a month before a war would show no real motive to go to war and this source theoretically protests Germany's innocence in being responsible for the outbreak of war in 1914. ...read more.

These sources argue whether it was decisions made in Berlin that triggered the war, sources 1 and 3 argue for this but not to the same extent as the opinion and this is the opposite effect from s ource 2. And so the decisions made in Berlin that were seen in these sources were responsible for some influence in deciding the outcome of war in Europe but not to the extent the opinion offers, due to the way it was the decisions made prior to 1900 and i n areas other than Berlin. It also comes down to the fact that if it was Germany to blame for the war, and the outbreak itself. But as this opinion narrows down the blame to just decisions based in a certain time period (1900-1914) it's difficult to agree with it to the same extent but decisions that were made were almost definitely another cause to add to the already colliding countries involved in the war. ...read more.