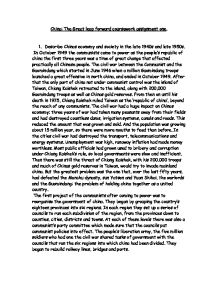 Describe Chinas economy and society in the late 1940s and late 1950s.

China: The Great leap forward coursework assignment one. 1. Describe Chinas economy and society in the late 1940s and late 1950s. In October 1949 the communists came to power as the people's republic of china the first three years was a time of great change that affected practically all Chinese people. The civil war between the Communist and the Guomindang which started in June 1946 when a million Guomindang troops launched a great offensive in north china, and ended in October 1949. After that the only part of china not under communist control was the island of Taiwan, Chiang Kaishek retreated to the island, along with 200,000 Guomindang troops as well as Chinas gold reserves. From then on until his death in 1975, Chiang Kaishek ruled Taiwan as the 'republic of china', beyond the reach of any communists. ...read more.

The first project of the communists after coming to power was to reorganise the government of china. They began by grouping the country's eighteen provinces into six regions. In each region they set up a series of councils to run each subdivision of the region, from the provinces down to counties, cities, districts and towns. At each of these levels there was also a communist's party committee which made sure that the councils put communist policies into effect. The people's liberation army, the five million soldiers who had one the civil war shared tasks of government with the councils that ran the six regions into which china had been divided. They began to rebuild railway lines, bridges and ports. Also the communist made many changes for the rights of woman in April 1950 the new government introduced a marriage law. ...read more.

30 June 1950 an agrarian reform law this moved along the process of land reform. Between 1950 and 1952 about 40 per cent of all cultivated land was taken away from the landlords a 'rich' peasant, and were given to approximately 300 million peasants. The agrarian reform law of 1950 did not live up to all the peasant's expectations, after receiving their land, peasants were normally resentfully disappointed when they realised they not no equipment to work with, neither the money to buy any equipment. Many of them joined mutual aid teams of about ten families which then worked together on the land sharing their animals and equipment. The new communists government try to overcome china's economy problems by at first taking away major banks, the railway network, and about a third of heavy industrys and made in to state property. The profits from these ventures were paid immediately into the state treasury, giving the government roughly two thirds of its yearly income. ...read more.