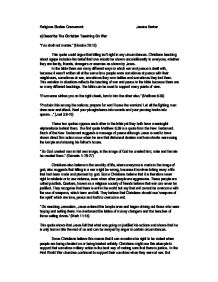 Describe The Christian Teaching On War.

Religious Studies Coursework Jessica Barker a) Describe The Christian Teaching On War "You shall not murder." (Exodus 20:13) This quote could argue that killing isn't right in any circumstances. Christians teaching about agape includes the belief that love should be shown unconditionally to everyone, whether they are family, friends, strangers or enemies as shown by Jesus. In the bible there are many different ways in which war and peace is dealt with, because it wasn't written all at the same time people were sometimes at peace with their neighbours, sometimes at war, sometimes they won battles and sometimes they lost them. This variation in situations reflects the teaching of war and peace in the bible because there are so many different teachings. The bible can be used to support many points of view. "If someone strikes you on the right cheek, turn to him the other also." (Matthew 5:39) "Proclaim this among the nations; prepare for war! Rouse the warriors! Let all the fighting men draw near and attack. Beat your ploughshares into swords and your pruning hooks into spears..." ...read more.

Some Christians believed that it was necessary, because it brought a swift end to the war, but others said that it was an evil thing to have done and that it was totally against Christian teaching. Many Christians believe that there is such a thing as a 'Just War'. This is war that is morally right to fight. But there are conditions to be met before action can said to be justified: 1. War should be declared by a proper authority such as a government or a king, and not just by any ordinary group of people. War should be declared by someone with authority who knows what should be done and what processes to take. 2. There must be a good reason for starting a war, not simply greed. A war cannot be started for petty reasons. 3. The reason for going to war must be a desire to do good. The reason for going to war must be so that something good is going to come out of it and not just destruction and harm. Later four other conditions were added: . ...read more.

(Deuteronomy 7:22-24) The Church of England today teaches that war is sometimes 'an unfortunate necessity', something which might have to happen in order to prevent even worse evil. The Church of England and Methodist Church accept the right of individuals to follow their own consciences about whether or not to fight in a war. This means going to war with a country because they could be a threat to other countries for example the war between the USA and Vietnam. The USA wanted to stop the spread of communism throughout Europe and thought the only way to stop it would be to go to war. The Catholic Church agrees, teaching that nuclear weapons must only be used as a deterrent, to prevent war, and must never be used to attack whole populations or whole cities. Countries, which have nuclear weapons, should always be working to reduce them. Both catholic and Church of England encourage their members to pray for peace and love all around the world. The power of prayer can be very strong if you believe in it. Many Christian churches hold a view that although war is wrong, it can sometimes be the only way of resolving a situation of injustice or abuse of human rights. ...read more.